I’ll be honest: I take the stars for granted.

To be fair, I live in the city and it can be sort of difficult to see the stars most nights, but I can’t deny the incredible awe I feel when I get away enough from the city lights and noise and am able to stare up at the boundless evening sky.

My best friend, Brian, was always fascinated with space. He loved the stars and the idea of exploration and mystery. He was constantly following the exploits of NASA and was excited to talk about new photos from the Mars rover or an interesting phenomenon that scientists had discovered. I was always happy to listen and chat, but I fully admit to not having quite the same fascination with space as he did.

When I started working at Stardock, a place that specializes in and celebrates space themed strategy games, he was thrilled. We played a few games of Ashes of the Singularity together, tried (and failed) at GalCiv III, and eventually settled on playing Offworld Trading Company. He loved the idea that the maps were based on real places on Mars and that an actual planetary geologist was consulted in their creation.

If I’m being honest, we were both pretty terrible at the game and got absolutely wrecked anytime we tried playing outside of our small circle of friends (ranked play was not for us!). But, I still love the game anyway and know plenty of others who are mediocre players but still enjoy it as well.

Yesterday, I stumbled upon a book of space photos that belonged to Brian and had gotten lost in a sea of others on a shelf in my office, which made me start to think about the hours we’d poured into Offworld Trading Company together. I took to the internet to do a little more sleuthing, and I wanted to share a few cool images I found that were the inspirations for many of the maps (including one from Io, featured in the Jupiter's Forge expansion!) within the game. 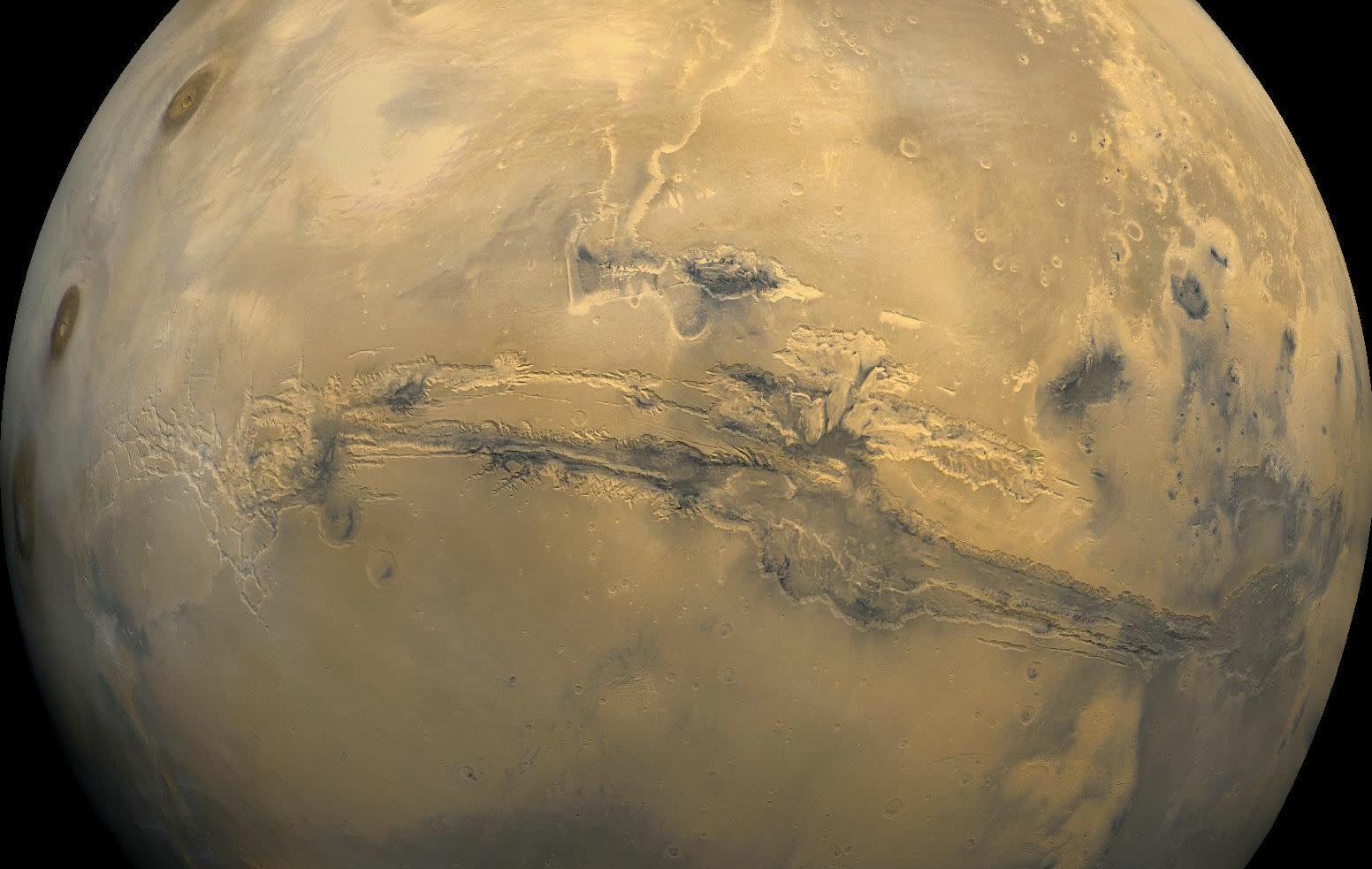 From NASA: Valles Marineris, or Mariner Valley, is a vast canyon system that runs along the Martian equator just east of the Tharsis region. Valles Marineris is 4000 km (2500 mi) long and reaches depths of up to 7 km (4 mi)! For comparison, the Grand Canyon in Arizona is about 800 km (500 mi) long and 1.6 km (1 mi) deep. In fact, the extent of Valles Marineris is as long as the United States and it spans about 20 percent (1/5) of the entire distance around Mars! The canyon extends from the Noctis Labyrinthus region in the west to the chaotic terrain in the east. 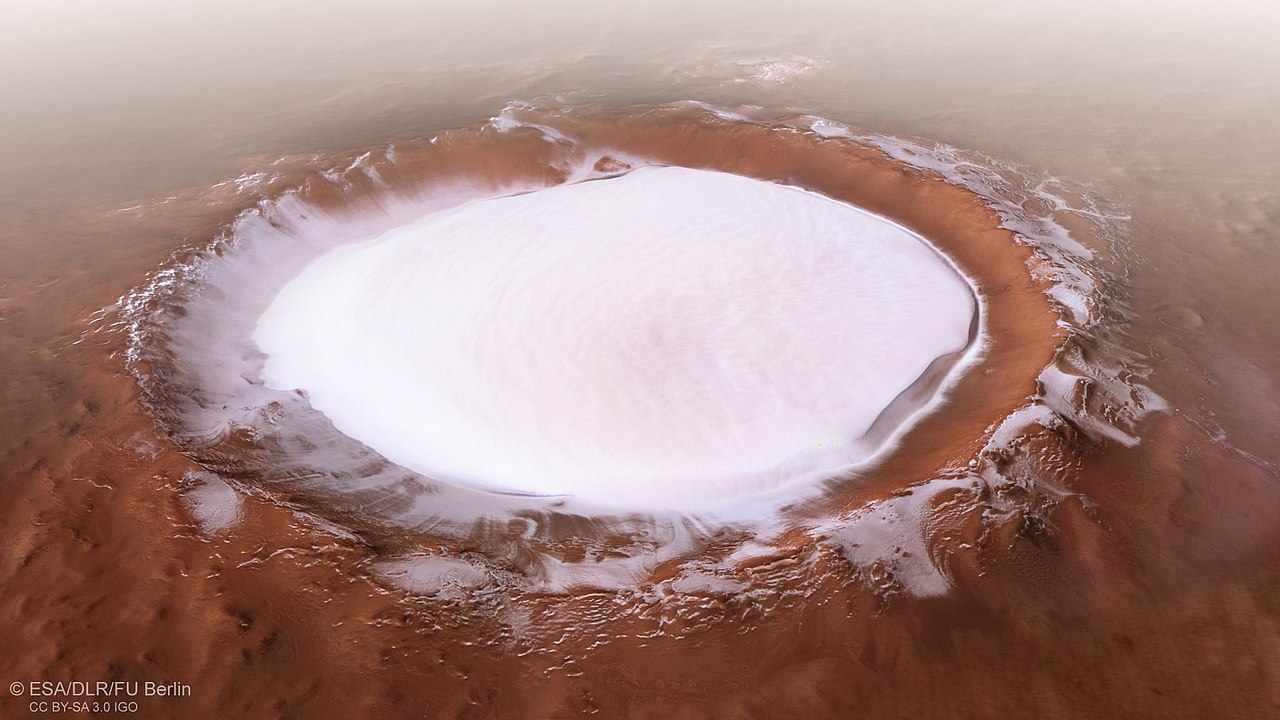 From Space.com: Ice is found in the deepest parts of this formation, called Korolev Crater, and as air moves over the ice, it cools down and sinks, producing cold air right above the chilly deposit. ESA officials called this phenomenon a "cold trap" because the air acts as a shield to keep the crater "permanently icy." Korolev Crater is 82 kilometers across (51 miles) and found just south of terrain that wraps around Olympia Undae, Mars' northern polar cap. The crater floor can reach depths of two kilometers (1.2 miles) below its rim, deeper than Earth's Grand Canyon. 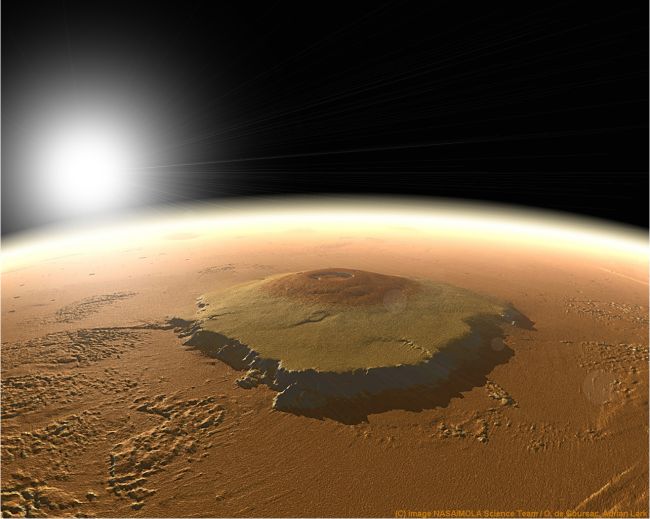 From NASA: The largest of the volcanoes in the Tharsis Montes region, as well as all known volcanoes in the solar system, is Olympus Mons. Olympus Mons is a shield volcano 624 km (374 mi) in diameter (approximately the same size as the state of Arizona), 25 km (16 mi) high, and is rimmed by a 6 km (4 mi) high scarp. A caldera 80 km (50 mi) wide is located at the summit of Olympus Mons. To compare, the largest volcano on Earth is Mauna Loa. Mauna Loa is a shield volcano 10 km (6.3 mi) high and 120 km (75 mi) across. The volume of Olympus Mons is about 100 times larger than that of Mauna Loa. In fact, the entire chain of Hawaiian islands (from Kauai to Hawaii) would fit inside Olympus Mons! 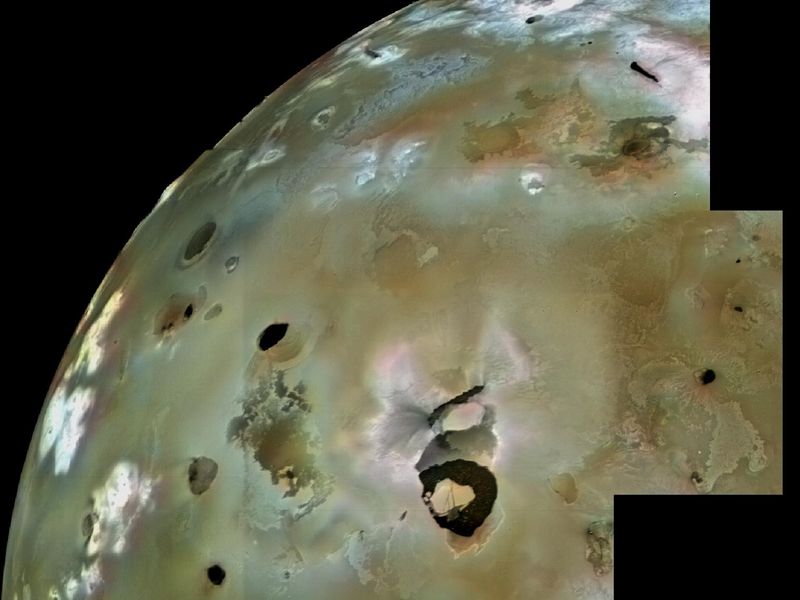 From NASA: A huge area of Io's volcanic plains is shown in this Voyager 1 image mosaic. Numerous volcanic calderas and lava flows are visible here. Loki Patera, an active lava lake, is the large shield-shaped black feature. Heat emitted from Loki can be seen through telescopes all the way from Earth. These telescopic observations tell us that Loki has been active continuously (or at least every time astronomers have looked) since the Voyager 1 flyby in March 1979. The composition of Io's volcanic plains and lava flows has not been determined, but they could consist dominantly of sulfur with surface frosts of sulfur dioxide or of silicates (such as basalts) encrusted with sulfur and sulfur dioxide condensates. The bright whitish patches probably consist of freshly deposited SO2 frost. The black spots, including Loki, are probably hot sulfur lava, which may remain molten by intrusions of molten silicate magma, coming up from deeper within Io.

Pretty neat, right? I'd love to hear if you have any favorite things about space  - or space strategy gaming!

I lost Brian to cancer in 2016. His name still shows up in my Discord server, grayed out and eternally at the bottom of the user list. I miss him more than I can possibly express, but when I feel like I need to see him or talk with him, I get in my car, drive out to a field... and go have a look up at the stars.