I’ve been saying for awhile that I wanted to get some surveillance cameras for the outside of my house. I keep putting it off (that money could be used for board games, after all!), but an incident on Tuesday finally is forcing my hand and I’ve started researching some options.

What happened on Tuesday, you ask? Oh, nothing gouda. 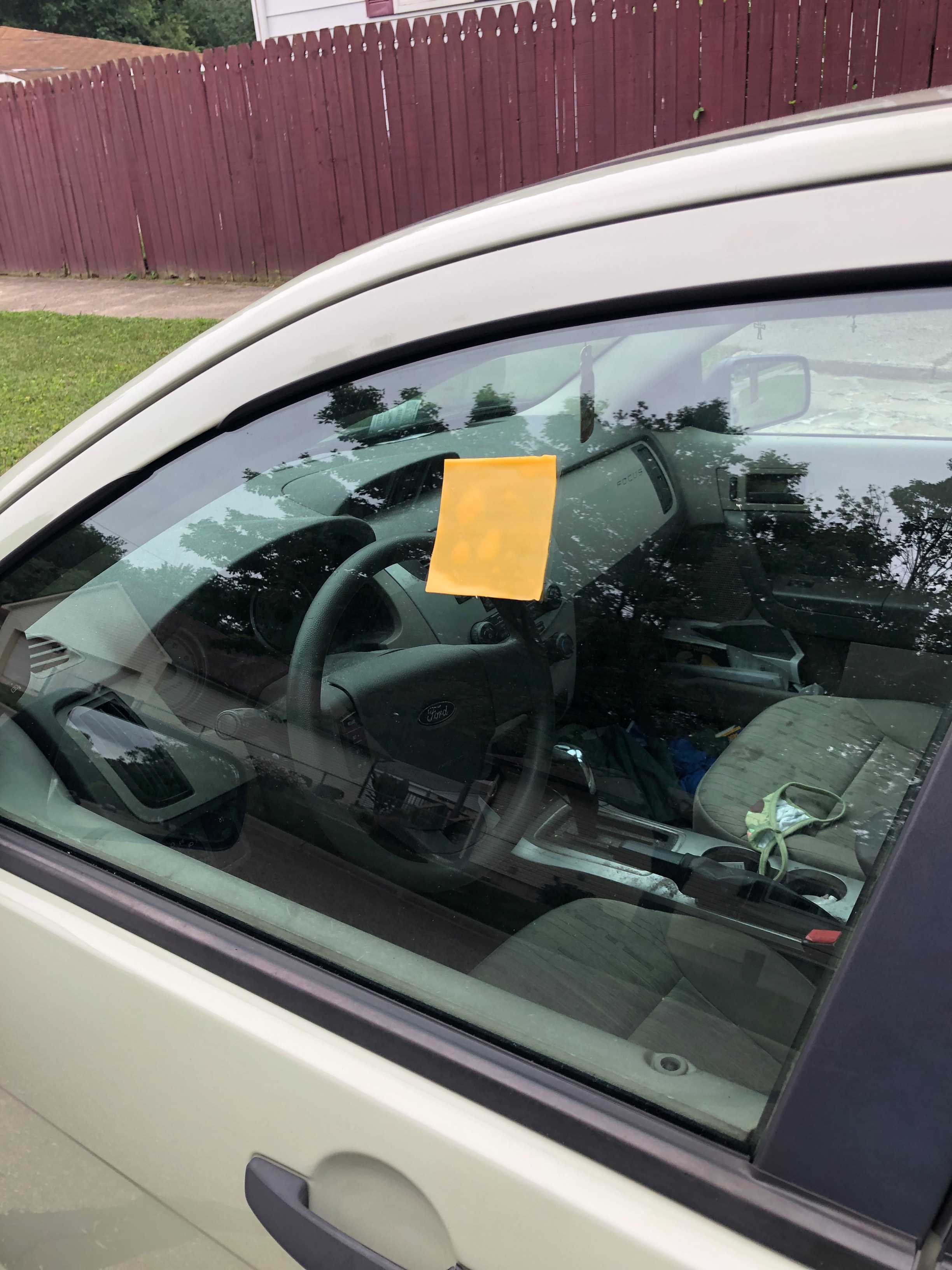 Yep, you’re seeing that right. It is, indeed, a slice of cheddar cheese pressed snugly onto my car’s window. In the grand scheme of things, it’s fairly harmless (no matter how you slice it, though, it’s certainly annoying) and I can make jokes about it now, like how those punks had cheddar watch out.

The jokes don’t get any better from here on out. ANYWAY.

This latest prank really cheesed me off and finally put me into the dreaded research phase, something I do (albeit it sort of reluctantly) before I make any big purchase that I want to last. In the 8 years I’ve lived at my house, I can really only count a handful of incidents, some annoying but harmless (like moving my shepherd’s crook around the yard, honestly I found that one pretty funny) and some problematic enough to warrant a police report (like someone throwing a frozen water bottle and shattering my window). It’s a little weird that some wayward dairy would be what finally snapped me, but I guess I’m finally just feta up with the nonsense.

The first major thing I discovered during my research phase is just how many options are out there. I’d heard of things like Nest, Ring (I actually have the doorbell), and Blink, but I didn’t realize just how much more was available to me. Upon discovering that, I started to look into what features in a camera were important to me, and then narrowed my choices down from there.

Here are the things I’ve been looking at while shopping:

What kind of alerts can I get from the camera?

This one might seem like a bit of a no brainer, but I’ve learned that this is a very legitimate question. I want a camera that will send notifications to my phone and has an easy-to-use app, but I’m finding that not all are created equal in that regard. Some cameras will send alerts whenever they detect motion, while others might do so when it detects sound or a face - some do all three!

How is it powered?

This one definitely didn’t occur to me at first. It seems like most of the cameras I’ve been looking at have battery back-ups and can run for long periods of time without having to be charged constantly. Ideally, I’d love a camera that doesn’t run on battery only (but has a backup in case of a power outage), but I’m also not thrilled about the prospect of having to do any additional wiring, so I guess we’ll see where I land on that later.

What does it do with the recordings?

I do have a Ring doorbell (I got one for Christmas), and I have to pay a very small monthly fee in order to maintain Cloud storage for any footage the camera captures. For a lot of reasons, this is a great system - even if something happens to the camera, the footage is loaded into the cloud and I have access to it for later. So, looking at what kind of subscription cost I’d be paying for the Cloud service on a camera is also going to factor into my decision.

Does the camera have environmental monitoring?

Personally, I don’t find this to be at the top of my priority list. Right now, I just need the camera to capture anything happening on the side of my house, not report temperature, humidity, and air quality to me. While those are certainly cool features, it definitely drives up the cost for a camera, and it’s not something I feel the need to pay for right now.

Does the camera interface with other smart home apps?

I definitely wouldn’t say that I have a very “smart” home right now. I have an echo dot I use occasionally to play music and turn my basement lights on and off, but that’s about it. Still, it might be nice to find some additional use for it and choose a camera that will interface with it properly.

Does the camera pan, tilt, or swivel? Does it have night vision?

I definitely need the night vision, though I think a stationary camera will be just fine for my needs. I don’t need motion tracking, though it’s cool to know that’s even an option.

I always forget to think about things like this. Ideally, I want a camera that captures at 1080p for the best chance at being able to see everything in a piece of footage, though I could probably get away with 720p. I definitely don’t need anything as high as 2K or 4K.

Does the camera have wireless security protocols?

I’ve definitely heard the horror stories about hackers finding their way into people’s baby cameras. I learned while I was doing some research that it’s important to find out what steps each manufacturer has taken to deal with that problem. A camera that encrypts transmission of my username, password, etc. is absolutely essential.

What? IP stands for something other than “Internet Protocol?”

As I’ve found out, it sure does. In this case, IP stands for “Ingress Protection,” which is supposed to be a more definitive rating system than saying something like water or dust resistant. I still don’t fully understand the scope of the ratings system, but I’m working on it - having a camera that can withstand the constantly changing Michigan elements is very important for me.

So, as eager as I am to purchase and install my new cameras, I still want to make sure I don’t act impulsively and take the proper time to find the one that’ll work best for me. I know there are a lot of people who manage their own cameras and security for their homes and probably make better use of their Smart devices.

Do you have a preferred camera? What are your home security stories?