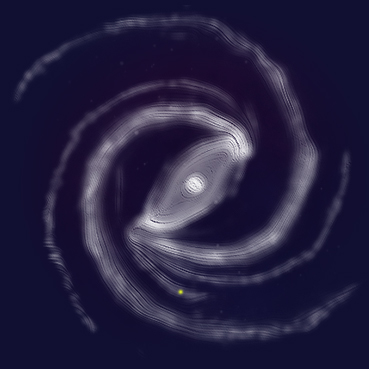 Around 8 kiloparsecs from the galactic core is a yellow dwarf star. Its location is quite outside the the area of the galaxy that anyone would really care about.

This is a map of the milky way galaxy. It’s probably unlike any map you’ve seen before. That’s because unlike most maps, this is a map designed to show you the geography of the milky way galaxy. Our galaxy is made up of several different arms. What matters to us – and this is important – is that our arm jets out of Sagitarius arm like a spur. We call it “Orion’s Spur” and we’re kind of at the end of a one-way path. This turned out to be very good news because we’re way behind the curve.

Around 250,000 years ago there was a galaxy-wide war known as the “Eternal Wars”. We know very little about it but the destruction was so widespread that about 60,000 years later, the gravitational effects reached our solar system and made a slight adjustment to our orbit. This is known as “the big chill”. It knocked the human population on Earth to less than 1,000 people.

This catataclysm had two effects. First, it so reduced the population that it would take 175,000 years for humans to recover. Second, the 1,000 or did survive were the best and brightest of the species. The net result is that humans are ingenious, industrious, reckless and adventurous.

No one knows what happened to the Precursors other than after the Eternal Wars, they seemed to have disappeared. When they disappeared they left behind the Origins. These immense structures allow ships to travel to other universes.

Over the millennia, more than once rising civilization has discovered the secret to using the Precursor Origins. With the power to travel to other universes, these civilizations were able to reap great rewards but also occasionally unleashed great tragedy upon our own area of space.

The Faction of Eight

Approximately 20,000 years ago, a group of approximately equal civilizations in the area entered into an unusual alliance. Known as the Faction of Eight, they brought a degree of order and unity to the known regions of Orion’s Spur, one not seen since the departure of the Precursors.

For a time, there was peace and many new species were uplifted. One such species was known as the Scryve. Young and idealistic, the Scryve chaffed under the restrictions set upon them by the Faction of Eight. In time, using unknown means, the Scryve managed to banish the faction of eight from our universe.

In time, the Scryve become obsessed with order and conformity ruthlessly obliterating any species that could become a potential threat to them.

Approximately 600 years ago, the Scryve’s influence began to reach into the far end of the spur where the yellow dwarf star that is home to the humans. This area had relatively little interest to the Scryve until they began to receive radio signals from a new species that was quite aggressive and advancing at an astounding speed. A threat that the Scryve simply cannot tolerate.