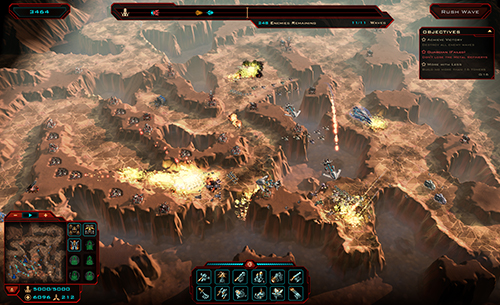 Set in the Ashes of the Singularity™ universe, Siege of Centauri places the player in the role of commander of the defense of Earth's first colony on Proxima Centauri. Beta 3 adds a scenario editor where players can create and share their own missions, and a new endless mode that allows users to see how long they can last against a limitless onslaught of enemies.

“It’s always been important for us here at Stardock to put customization into the hands of the players,” said lead designer Derek Paxton. “Beta 3’s scenario workshop does exactly that: it lets people who have always wanted to design their own tower defense games create their own maps and missions.” Players can learn more about how to make their own scenarios with the Modder’s Guide.

Endless mode is a highly anticipated feature that has also made its way into the Beta 3 update. Players can attempt to survive increasingly difficult enemy waves on a few new maps that will present them with some very challenging choices.

Several new towers, enemies, and upgrades that make for deeper strategic choices are also in Beta 3. In addition, new scenarios that continue the story of the colony’s struggles are ready for players to explore.

The Early Access program is designed to allow fans to have input into game mechanics, pacing, and balance. Stardock has been releasing frequent updates based on player feedback.

“Beta updates and community feedback are a critical part of Stardock’s development process,” said Paxton. “We’ve been really happy with how the fans have helped shape this game.”

Siege of Centauri is currently in Early Access on Steam and Stardock for $9.99. The final version is expected to sell for $14.99. For more information on what’s new in Beta 3, visit the forums.