Players have been contributing questions to the Lore Google doc.  There is a lot even we don't know yet about this universe.  It's a strange, complicated and ancient place and many of those who do know are not very cooperative with us for various reasons including excuses like "You're just meat" (whatever that means) and "Seriously, you're just meat".

A few assumptions about you

If you have access to this Star Control intelligence document, we will assume you are already familiar with the universes we already have some familiarity with.  Thus far, Star Control Universe Intelligence (SCUI) has categorized information from what we refer to at the 6000 series of universes. Specifically, the 6014 universe, the 6058 universe, the 6015 universe and of course our universe which is designated at 6091.

Answers to Questions from the Google Lore document Q&A:

Are the Orz in our universe?

Not that we are aware of.  Thus far, the Orz have only been seen in the universes that also feature the Ur-Quan.  We do not know if there is a connection.  But thus far, none of the aliens from that universe have appeared here.

What do we know about the Faction of Eight?

Very little so far.  What little we know comes from the Tywom Science Council.  They existed approximately 11,000 years ago.  We don't even know what worlds they were on.

How big is the known universe?

There is known and then there is known.  With modern telescopes, including the Hercules that orbits Neptune now, we can see a lot.  However, we still can't see most brown-dwarfs.  The star charts we've received from the Tywom don't go out very far. 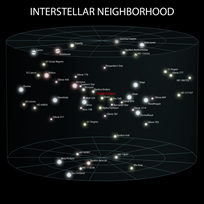 We can reach approximately a thousand star systems with the Tywom Hyperdrive.  Unfortunately, most stars are too dim to see until we are relatively close.  After all, only 50 years ago we only knew about 8 planets in our own solar system.

What do we know about "Jeff"?

We aren't even sure that's his real name.  The only race that even speaks our language are the Tywom and without their universal translation technology, we wouldn't be able to interact with anyone.  Jeff is simply the name the translation software converts his name to.  What we do know is that he's incredibly powerful but also not particularly interested in any of us.

What is Jeff helping the Mowlings?

We don't know yet.  The Mowlings technology is less advanced than even our own.  They don't even appear to have Hyperdrive (well, technically, neither do we yet but we're working on it).  Clearly, the only reason the Scryve haven't wiped them out is because of Jeff.  Why is he helping them? We don't know.

How did we first learn of the other universes?

Mostly through the Tywom. They have not encountered an Origin yet but they have researched the various oral histories from non-uplifited species who seem to have originated elsewhere.

What do we know about the Scryve and their empire?

Unfortunately, not a lot.  They are the primary power in this sector of the galaxy and their empire has thrived for thousands of years.

What do we know about the Precursor starbases?

They seem to be automated which allows for upgrading and refueling of ships provided that they provide the necessary resources.

What happened to the Precursors?

We don't really know.  Something pretty awful happened around 250,000 years ago. We humans were still messing with stone tools back then.

Can you elaborate on the rumors that there is a powerful being called "The Ancient One" roaming this sector?

We know it's powerful and that it fled from the galactic core.  It hasn't yet come anywhere near this part of the sector.

The technological singularity was as good and as bad as we thought.  As a species, we had to make some tough choices.  One of those choices led to the flight of the artificial beings referred to as "Synths".  There has been no contact with them since.  However, as they were the impetus for the Star Control program, we remain committed to finding out their fate.

Are there any more comments regarding the artifact found on Mars?

What is the ETA on us being able to manufacture our own Hyperdrives? What do you have to say to those believe that our tax dollars are better spent simply purchasing more from the Tywom or the Menkmack?

Star Control's policy has not changed.  The generosity of the Tywom is appreciated as well as the...eagerness of the Menkmack.  However, for Earth to survive what is obviously coming, we cannot rely on others to supply our fleets.

What about the rumor that something sent two Mars-sized objects into it at near relativistic speeds?

There is no evidence for that. That is a baseless rumor.

Can we really trust the Tywom?