Not all ships are created equally.  This is particularly true for the ships of Star Control itself.  In the year 2088, the United Earth Advanced Space Vehicle Program (UEASV) had done its best given the politics involved.  But ultimately, what Star Control starts out with is a ship with very much the capabilities that a ship in 2088 would have, which is to say: it can... turtle around the solar system.

The first long-range ship program - the Vindicator program - was designed to allow the ship to be frequently updated with new modules.  Because the ship was designed to handle technology from different nations such as the United States, China, Russia, Japan, Germany, France, Brazil, etc. the interfaces are remarkably flexible.

Ironically, this need for flexibility has also made the Vindicator class well suited for plugging into alien technology that arrives... 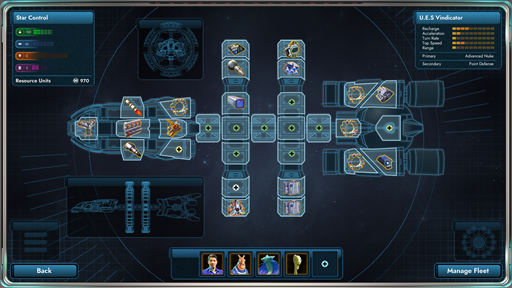 The early concepts for the Vindicator and Earth Cruiser took inspiration from many real-world and science fiction sources. There are nods to Star Trek, Space 1999, and of course, previous Star Control games.  Our main focus was to make ships that would look and feel like ships that might actually exist by 2088.

For the Vindicator itself, we went through a great deal of consideration for this: 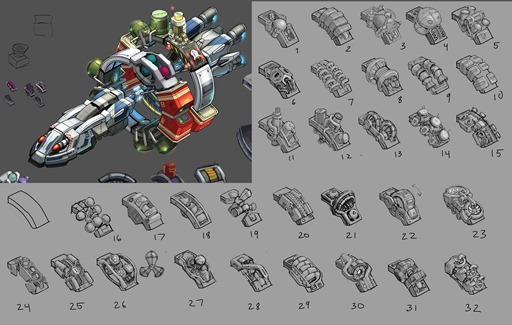 Early on, a lot of effort was spent coming up with different pieces that would make up the ship as you upgraded it. 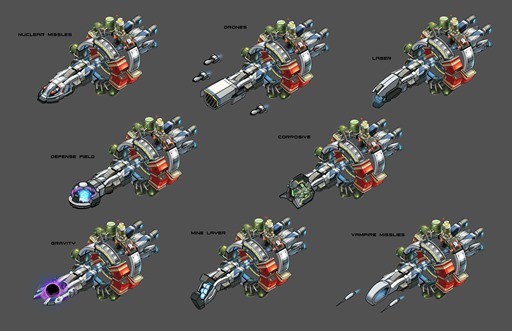 The idea was that by the end of the game, your ship would look substantially different from where it started, but also still be somewhat recognizable. 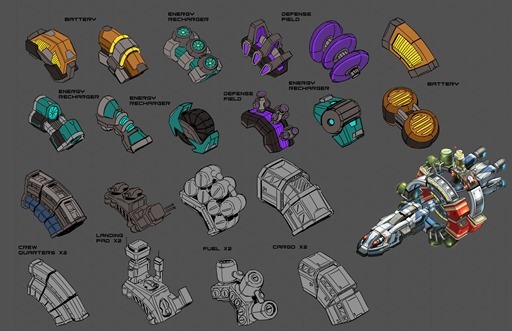 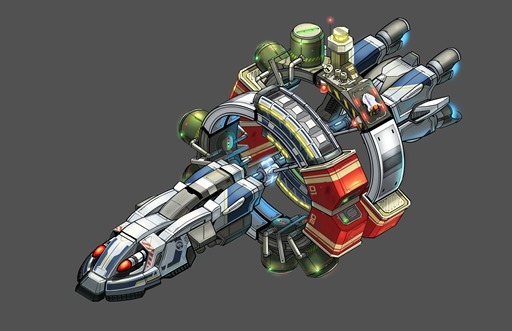 For the Cruiser, we ended up with this design: 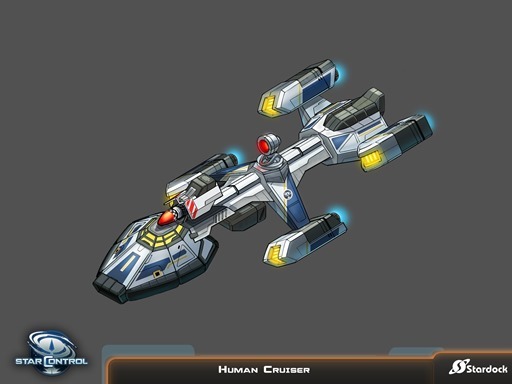 Only Earthlings are crazy enough to put nukes on a ship. We just like them so much.

For alien ships, we tried to throw out all preconceived notions as to what an alien ship might look like. 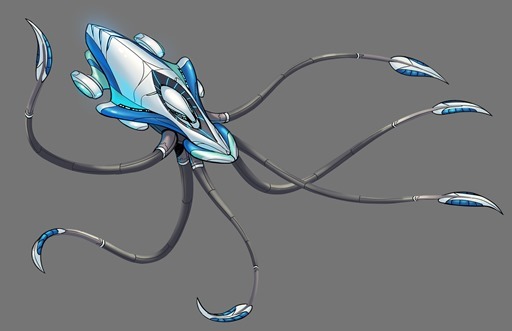 Other ideas for the Mu'Kay 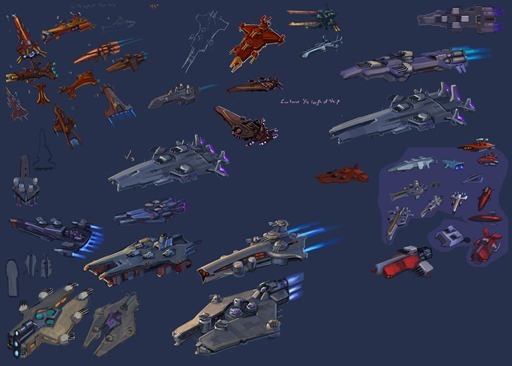 The Scryve went through many different concepts 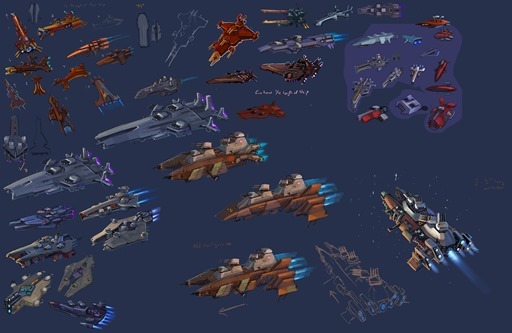 We would find other places for some of these ideas. 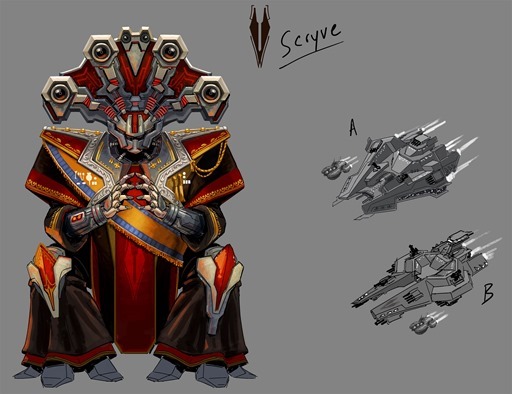 The Scryve's primary weapon is a big, overpowering but inflexible death beam that matches their species and cultural background.  Strong. Powerful. Unmovable.

By contrast, the Drenkend are basically cannon fodder for the Scryve.  They simply throw themselves enmasse at the enemy. 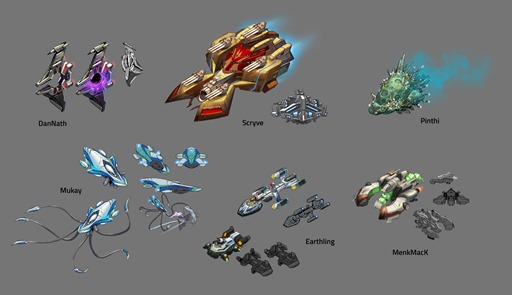 Making sure every ship was instantly distinct was central to their design.

A space ship is an extension of a civilization's cultural heritage.  This meant that we couldn't simply just draw up cool ships in a vacuum.  They had to be matched with what that civilization is about, including weapons.

Nothing makes that clearer than the Mu'kay: 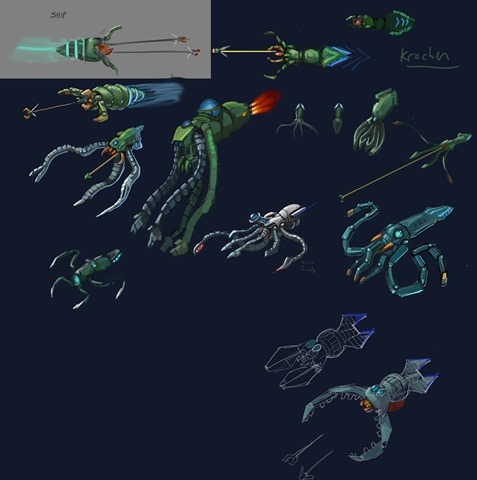 A civilization that lives in water and brings water with them is going to have a different design language than, say, humans with our love of nukes and lasers.

With humans, we always knew we'd have something like this: 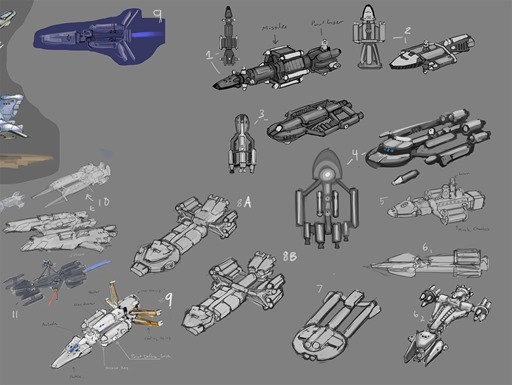 By contrast, a civilization that developed an early understanding of gravity and how to manipulate it would likely take a very different path: 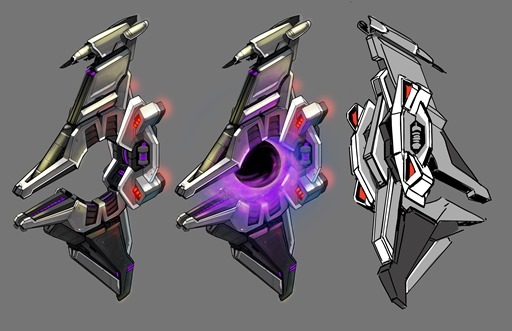 But not just a single ship...

Of course, it wasn't enough to just have one ship per civilization.   If we're traveling through a living universe, one would expect many different types of ships.

Below are some examples of ships from the Scryve. 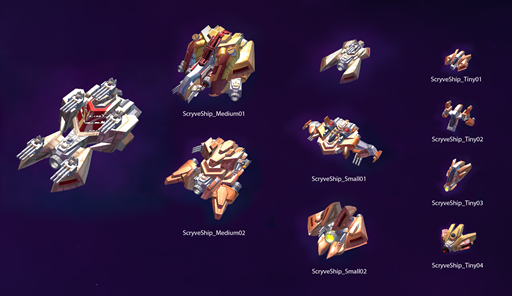 And next we have ships from the Drenkend: 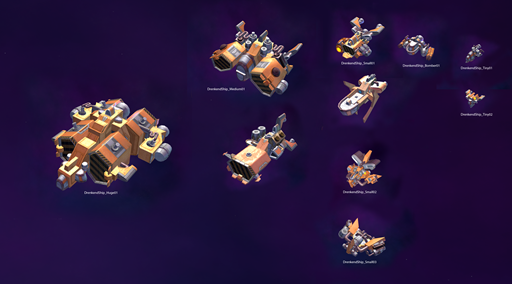 These have both a gameplay purpose, as well as a way of deepening the Star Control lore.

On the gameplay side, we wanted to have tougher and tougher ships to encounter if you went deep into enemy territory.  We didn't want to rely on "you now must fight 10 of the same ship in a row," to make it tough.  Early on, for example, the player will encounter pretty wimpy Scryve ships.  But later on, things become more challenging, and of course the weapons are more exotic.

A means to an end

Ultimately, the ships of Star Control are extensions of that alien's civilization.  Star Control is designed not just to be a space RPG, but one in which the universe itself feels like it's alive and has been alive since before humans decided to get out of the trees.