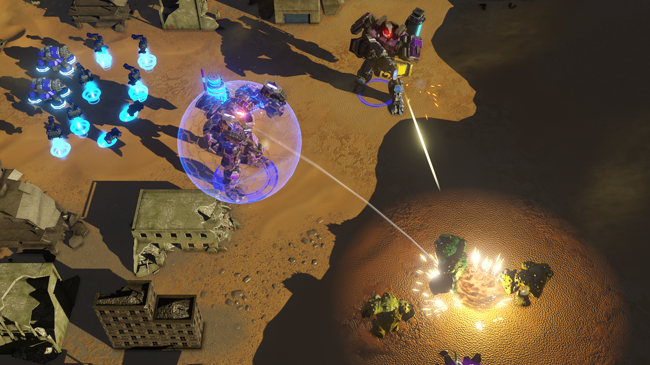 Stardock and BonusXP are thrilled to announce that Servo is now available on Steam Early Access. Customize your team of giant war machines into the perfect force to carry out your orders in this sci-fi real-time strategy game from the minds of some of the key creative talent behind Age of Empires, including strategy genre godfather Bruce Shelley.

Servo marries classic RTS action to Diablo-style equipment upgrades, challenging players to not only devise and execute a strategy on the battlefield, but to design the perfect team of mechanical monstrosities to carry it out. Win or lose, every battle gets you closer to new parts for your Servos – and the new strategic and tactical possibilities that they create.

This initial Early Access launch makes both cooperative and competitive scenarios available, either online with other players or offline with an AI partner or opponent. The initial tutorial missions of the story-based campaign are also included, as well as the Arena mode that offers progressively higher rewards alongside its always-escalating risk.

Yet to come to Servo between now and its launch later this year are the remainder of the story campaign; deep multiplayer support in the form of extensive stat-tracking, leagues, and ladders; and tons of content from Servo parts to new maps and scenarios.

Servo is fully funded by BonusXP and Stardock. This Early Access period is for gameplay balancing and beta testing, not to scrape up enough cash to finish the game. We greatly value your support and feedback as we enter the home stretch of development.

Join us at twitch.tv/stardock every Tuesday at 3pm Eastern for our weekly dev stream, where we show off the latest in Servo development and interact with our community. We also keep a close eye on the official forums at www.servogame.com and on the Steam community, or you can get at us on Twitter at twitter.com/stardock and twitter.com/bonusxp.

We hope you enjoy blowing stuff up with custom-designed giant war machines as much as we do.