What kind of people are you?

I think the biggest reason the Galactic Civilizations series has been so popular over the years has been because each game is your own epic story.

In fact, the biggest request we get is to make the galaxy feel move alive.  With this Spring's mega expansion to Galactic Civilizations III, we hope to do just that.

Today, let's talk about what kind of civilization you might want to create.

Galactic Civilizations has been with me my entire adult life.  Since 1992, I've been making this game (GalCiv OS/2, GalCiv I, GalCiv II).  I took a break to design Ashes of the Singularity and now I'm back for the Crusade with a re-imagined look at how the economy works.

In Crusade, everything is very, very tight. That is, every resource matters.  The numbers across the board are much smaller and this has ramifications everywhere.  The result is a massive change to the pacing. It's both faster than the base game (early game) and slower (late game, techs and buildings and cool ships are not a 1-turn affair).  Each choice you make is meant to be meaningful.

Let's start from the beginning of a game: 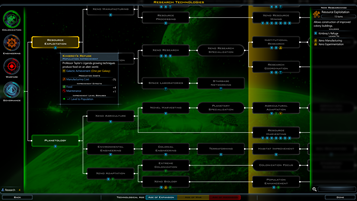 A: Research Resource Exploitation, which gives me access to Kimbrey's Refuge (a Galactic Achievement that produces 4 food, the only early game way of producing global food)

B: Research Planetology, which let's me build Brindle's Observatory, a Galactic Wonder that will discover a nearby Earthlike planet.

Research Interstellar Travel, which speeds up my ships by 1 move per turn

Research Militarization, which will let me build the Strategic Command wonder and award me with a General (super early game invasions)

Get Universal Translator, which will give me the ability to build the Galactic Intelligence Agency and grant me a spy very early on.

After we pick what technology we want to research, we are brought to the home planet (in this case, Earth) to decide what to build... 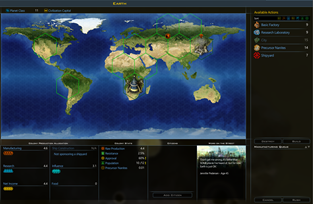 B: Research Lab to get new tech faster?

C: Shipyard to be able to build ships?

Wait, what? Yes. I took away your magic shipyard.  It's gone.  You have to build it.

The shipyard bugged me a lot.  Here's why:

From 1992 when I started programming Galactic Civilizations for OS/2 all the way to 2008 when I worked on Galactic Civilizations II: Twilight of the Arnor, it was always with the premise that Turn 1 took place the same day Earth launched its first interstellar ship (and later, whatever alien race you're playing as).

Then suddenly, in GalCiv III you have a shipyard, a Colony ship, a Scout, and a Survey ship?  It just felt like we had gotten pretty far away from the idea that we're at the dawn of the galactic age.

Now, I can hear some of you all the way from here saying, "But the early game will be too slow."  If we did this in the base game, it would be too slow.  But, like I said, numbers and early game is different now.

Crusade is NOT about spamming out colony ships.  The idea here is to have lots of interesting viable strategies.

If the early turns of a game are "boring," the answer is to fix that by making your choices more interesting, not throwing more stuff at you to do.  The base game of GalCiv III would be too slow if you didn't have all that stuff to do.  But Crusade is designed so that each turn matters including the first one and without so much stuff.

Now, getting back to our tough choice.   I am going to choose FACTORY because there's a +3 manufacturing bonus tile.  And I will rush buy it.

And for my tech choice, I decide to choose Planetology so I can get Brindle's Observatory.

The Survey Ship has a name:  the T.A.S. Discovery (for Humans, anyway).   The galaxy has a lot of interesting stuff that gradually respawns.  This means one economic strategy now is to build survey ships and send them out to go collect stuff. 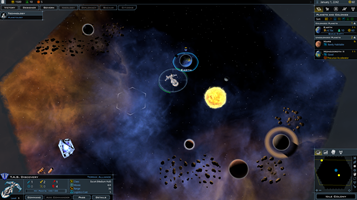 A: Send the Discovery out to explore?

B: Send it over to the bottom left to get that cargo container?

Yea: I want the cargo container.

The cargo container got my research half way done! Awesome!  New choices arrive: 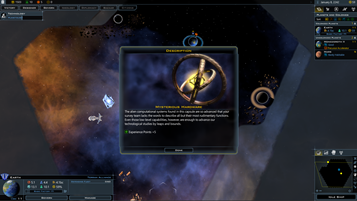 A:  Send him to get the two goodie huts below?

B: Send him out to explore?

I choose the goodies.

Delayed gratification will pay off.

Now I build the Shipyard. And thanks to my delayed gratification, I have a pretty decent economy going.  I might feel differently if those wonderful nearby planets get colonized, though... 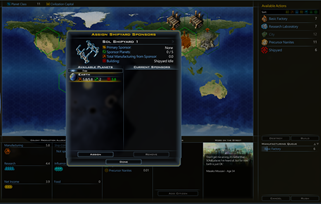 Turn 3: I can now build ships

I also order a Research Lab to be built. 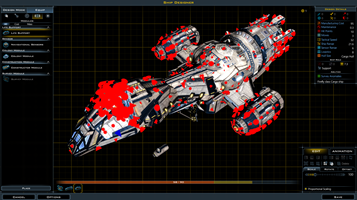 I design a ship based on a design I downloaded from Steam.  I call it "Serenity"

Now, which ship should I build? 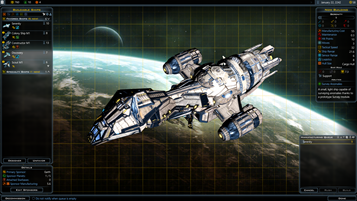 A: Serenity (my custom survey ship): Survey ships will go out and collect scattered resources

B: Colony ship (so I can get those sweet planets)

C: A Constructor: So I can lay permanent claim to galactic resources

D: A scout to go out and find stuff faster

I actually choose E: A short range colony ship I designed that is stripped down so that I can build it in 6 turns.

On Turn 3, I encounter an alien automated cargo ship that is carrying a shipment of a material called Durantium.  Its engines have failed but it is in the process of self-repairing and will be on its way.  What should we do?

A: Help fix the cargo vessel and send it on its way [Benevolent] (Costs 100 credits)

B: Do nothing [Pragmatic]

In Crusade, Durantium  matters. A lot.  You can't build larger hulled ships without it and you can't build the higher end factories without it.  On the other hand, if I steal it, who knows how that might come back to bite me later.  And 100 credits is a lot to fix it and it might amount to nothing...

The point being that each turn, there is something meaningful happening and it's all driven by the new economic system.  There is a cost and benefit to everything.

And don't forget that planets have lots of strange and interesting resources that are also required for certain rare galactic achievements and components. 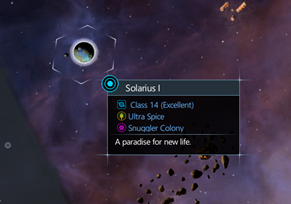 Planets will tell you what resources are on them.

And I'm already thinking about my next tech choice because Interstellar Travel will let me build the Eyes of the Universe wonder, but it requires 1 anti-matter resource which, as you may recall, I found!

Against the backdrop of thoughtfully deciding how to spend your precious finite resources, comes the new Citizen mechanic. You receive a new citizen every 10 turns (barring civ bonuses and events).  You train them in a particular field with the number of fields to choose from based on what techs you have.

Economics is the driving force of your civilization.  You need stuff to keep your people safe and happy.  How you get that stuff depends on your focus: Guns or Butter.

With all the talk of resources and how important they are, the cynical 4X player might be (should be) thinking "Crusade better have a really good diplomacy system!"  And the answer is, yes. Yes it does. 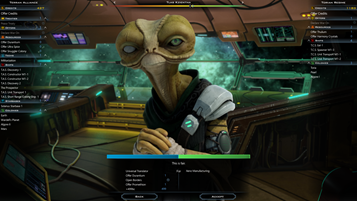 The bar in the middle changes to reflect the balance of the trade. As you add/remove resources, it updates.

Trading with other civilizations is now a lot easier.  And massively more fun.

One alternative to trade is, of course, conquest.

One of the careers you can choose for your citizens is Commander.  When you have Commanders available, you can select any existing fleet in your game and add a Commander to it. 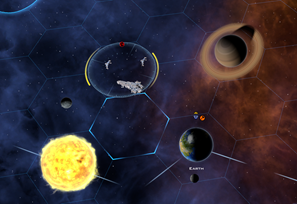 The Commander in his flag ship with his fleet

I renamed my Citizen to be Commander Xander from Canton, Michigan (for my son).  Now, the Flagship itself is pretty awesome for a number of reasons.

...And the ship itself is pretty decent in combat as well.

As cool as Commanders are, it's the promotions that make them really interesting. 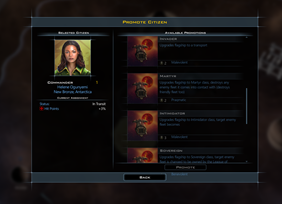 If you have the right ideology and the right resources, your Commanders can do some awesome stuff.

A few examples of what your Commanders can do if you have the right ideology and the resources:

The increase engagement is not just because of the new features.  It's a top to bottom revisit of the entire game and how the game interacts with you. 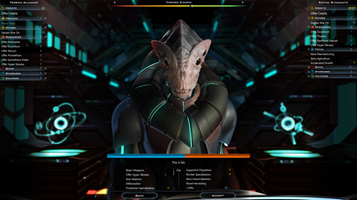 Below are just some, off the top of my head, examples experienced just in this game:

And you notice, I haven't even really gotten into Invasions yet... 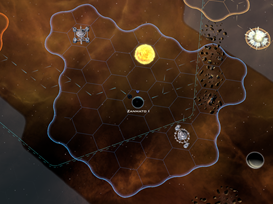 Every tile you own matters.  The entire influence/ZOC system has been redone. 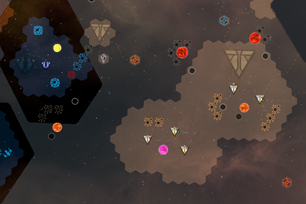 Strategic Zoom has been redone so that everything is cleaner. And since influence isn't just a big blob now, you have a lot more control over what is and isn't in your sphere of influence. 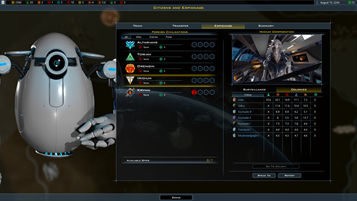 Spies can tell me who they plan to attack, what their internal political issues are and of course, can steal tech, sabotage things, etc.