Let's begin this diary with the understanding that conquest is not the primary means to victory in Galactic Civilizations.

While warfare is commonly seen as politics via other means, it is not the only or even the easiest way to "win".

That said, when you do go to war, you are dealing with battles on a scale that humans of the 21st century could scarcely imagine.  Invading a planet is an immense task.

Since the start of the Galactic Civilizations series, taking over a planet was a two-step process.

First, you had to gain space superiority by eliminating all of the defending ships in orbit.

Second, you had to then bring in a transport loaded with millions of soldiers to do battle on the surface.

To be honest, I created this system back in 1991 primarily to show off the AI of Galactic Civilizations. It was the very commercial multithreaded game and I wanted to demonstrate how the AI could plan multiple turns ahead.

In Galactic Civilizations III, the invasion system was largely the same.  You constructed a transport, transferred population from the planet onto it, and then took it to another planet whose orbits you had cleared of defending ships to do battle with ground forces.

We decided to use the term "legion" because we really needed a new term and an old term to grasp what invading a planet means.  The old term "legion" makes it approachable (but has no modern specific meaning).

Bottom line: To build transports, you need to have legions available.

To defend a planet after its orbital defense ships had been cleared required...nothing.  When an invader landed, your civilian population would be consumed fighting the enemy.

Now, if there are no defending legions, the planet is taken without a second thought.  But if you or your enemy has garrisoned a legion on that planet, then there's a ground war. That is the subject of this Dev Diary.

FAST FORWARD: A GALAXY ON FIRE 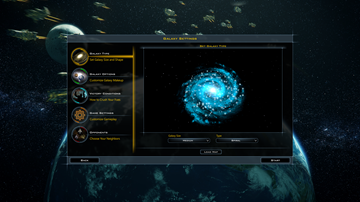 To get to invasions, you first have to fast-forward around 10 years... 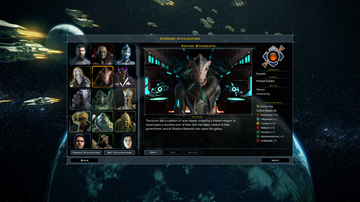 The Krynn are trying to spread "The Way" across the galaxy.

In Crusade, there are a bunch of new civilization traits.  The Krynn have the Devout trait which gives them a cleric (a citizen specialist only available to Devout civilizations).  They do not consider the Terran Coalition sufficiently...pious, and after they went to war with my friends, the Iconians, I agreed to help them against the growing menace of the Krynn. 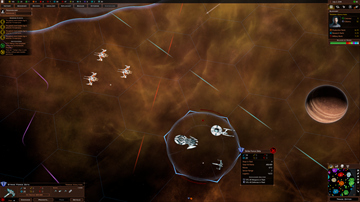 The Enterprise and my X-Wings were protecting Jupiter (don't judge me).

The Krynn came in with a very powerful force, but at great cost I had built up a decent defense. 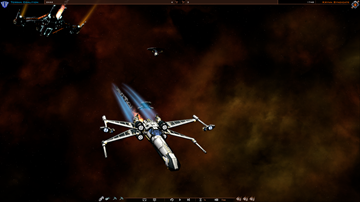 My little X-wings bought time for the Enterprise and my Commander to get in close. 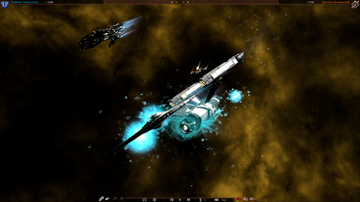 My spies had been studying the Krynn and saw that they were focusing on energy weapons,  so the Enterprise had the latest in shield technology on it.

The Krynn spent the early part of the war devastating my asteroid mining bases, but I was ready to take the war to them now. 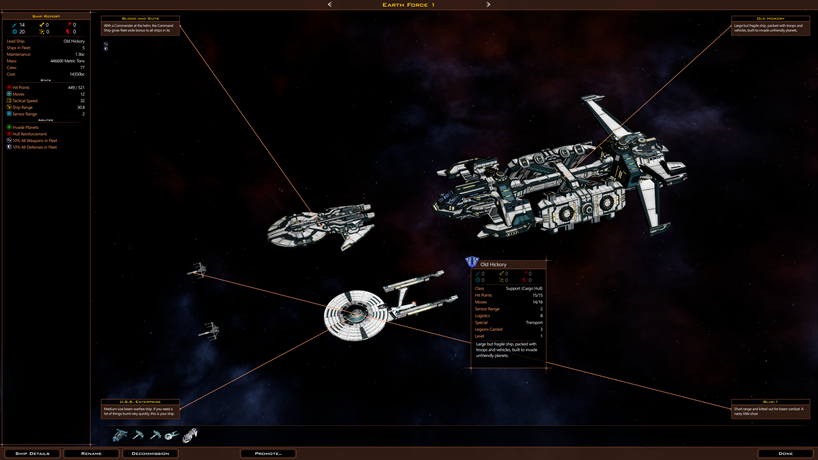 Here you get an idea just how large a Transport is.

This is my invasion fleet.  It carries 3 legions on it (millions of soldiers).  It is protected by the Enterprise, Commander Jenna's flag ship, and two X-wings (in case you haven't figured it out yet, you can design your own ships in this game or use ships designed by others).

My fleet fought its way to the heart of the Krynn Domain and made a surgical attack on Kyrseth itself.  With my invasion force at hand, I had the ability to look in and see what I was dealing with. 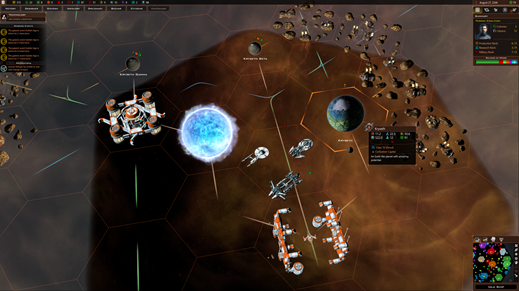 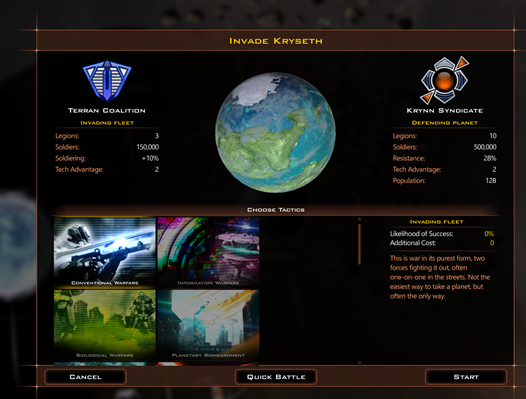 I have a number of different tactics I can use.  However, I am not far enough on the tech tree to use them.  But in Crusade, I have a new option: Raiding.  We're going in! 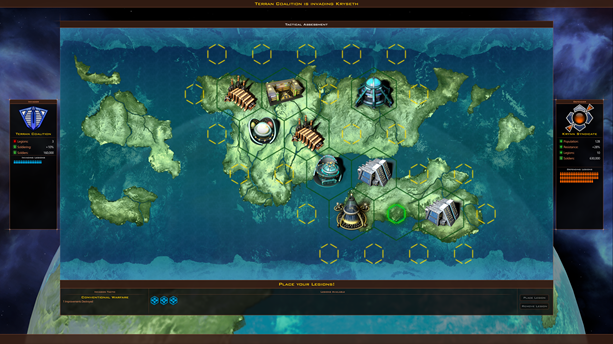 Still a work in progress, so I will explain how it works.

The placement of your legions matter.  They will b-line to cities and destroy any undefended improvements on the way.  Your opponent can place their legions where they choose as well.  Since the Krynn have 10 legions to my 3, he could place them in strategically important locations to protect his most valuable wonders and improvements.

Since I know I'm going to lose, I am going to place my legions in such a way to destroy his star port and his computer mainframe. 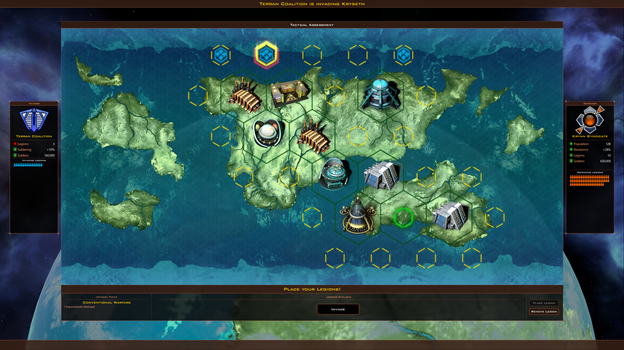 I have placed my legions in such a way to make sure they have to move through the star port and the planetary mainframe to get to the capital.

Once I hit the Invade button, the legions move out and destroy the improvements and do battle in the streets of the capital (from up here, they look like little tiny ants).

Between now and release, it's mostly about improving the effects to make this experience really cool and having the AI updated to try to predict where you might place your soldiers.  However, your goal isn't to kill the enemy soldiers - it is to capture the bulk of the population who live in the cities.  In this example, there was only 1 city.

A good opponent would have kept, say, 5 legions in the city and used the other 5 to protect the key planetary improvement.  Because he didn't, I destroyed his mainframe, his star port, and several other improvements, which crippled his capital world. 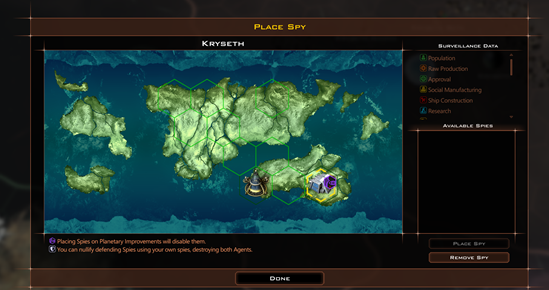 My spies show that only a single planetary improvement came out unscathed.

Most planets won't have any garrisons to defend it, so once you clear out the orbiting defenses, you can land unopposed. However, civilizations can train garrisons (send a legion to the planet) to protect it or, if it's a key world, send a general or two to the planet with his corresponding legions in tow.

Ultimately, I didn't conquer the Krynn in this game but because I brought them so low, they surrendered to the Yor.