The new Star Control is moving swiftly!  We expect to release Fleet Battles Beta 2 within the next several weeks as most of our work is focused on the adventure game.

We have been listening to feedback from the fans and incorporated that feedback into the project.

For example, below is a screenshot which shows the updated home solar system: 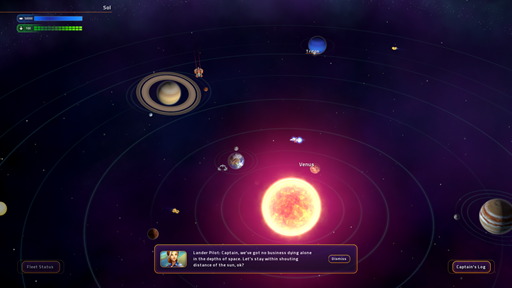 Similarly, the ships themselves have gotten the material system in early.  Originally, this was going to be added later, but there was a great deal of concern that our art style was too cartoony.  We just hadn’t implemented the material system into the game yet, since the game is still so far out from release.  We’ve since begun to implement that and you can really see it now in game quite well. 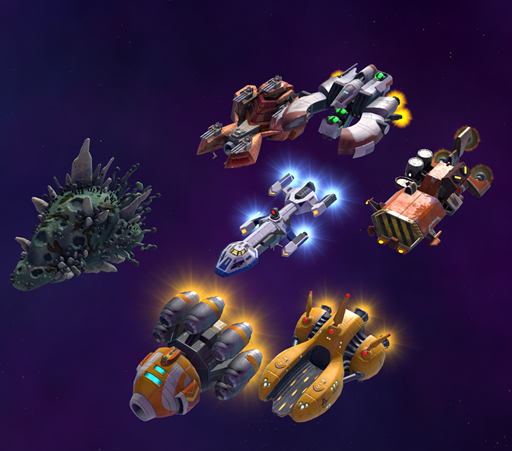 During the course of the Fleet Battles beta we will be adding additional ships, arenas, and game mechanics.  In particular, we are working on the concept of “scavenging”.  The idea is that the arena will have things you can pick up that will help your fleet overall.  In addition, some arenas have wormholes and ion storms in them, which present their own challenges.  The target date for this is before the Game Developer’s Conference.

So we get a lot of questions from Star Control fans who want to know how Star Control: Origins fits in with the classic series from decades ago.  Nothing makes that distinction more obvious than the Lexites.  In the Origins universe, the Lexites were created by humans as strong-AI that chose to leave Earth.  They weren’t slaves or robots.  They left Earth stating to us that they could do us far more good “out there” than staying with us.  Star Control was formed originally to find out where they went.   However, before the program was even launched, more pressing events unfolded which found you in command of Earth’s only ship of any relevance.

Which brings us to a series of questions we get regularly asked:

Is Star Control: Origins going to have 4X elements like SC3 and 1?

No. Origins is an adventure/RPG game.  You command your ship. However, because of the “living universe” element of the game, the player can have a great deal of effect on what happens in our area of space.  That’s because unlike the traditional linear RPG, Star Control: Origins’s adventure is actually a “state machine”.  State machines are very exciting for this style of game because it means we can create an adventure game with a strong story and a good narrative that also exists within a simulated universe.  Many of us grew up on RPGs where there were scripted behaviors by NPCs that made the world feel alive.  The idea of a state-machine based RPG is as old as Ultima IV.  However, state machines require a lot of CPU and memory to properly implement (not “a lot” by today’s standards, but certainly by 1992/2002/2012 standards). Since we require a minimum of 4 CPU cores and a 64-bit PC, we get to have our cake and eat it, too.

Ultimately, our gameplay style will be similar to Star Control II: The Ur-Quan Masters, but exist within a living universe that you can choose to interact with as much (or little) as you like.

Is the universe random?

No.  There is no random number generator in Star Control: Origins.  Everything is determinative.  What this means is that you do A, B, and C in the same order at the same time, another player will do A, B and C and get the same results.  Why does this matter? Because we don’t want to “dumb down” the game, and letting players collaborate together online to solve some of the more challenging elements is part of our gameplay.  The typical player will likely be able to, with some challenge, deal with the primary narrative.  But, it’s a big universe out there.  And we plan to also cater to those players who want extreme challenges in solving problems.

Star Control doesn’t have bread crumbs. We provide the information you’ve seen in your Captain’s Log so you don’t have to write that down.  But that’s as far as it goes.  We don’t have, “You must now go to this guy and talk to him in order to get the secret code.”  There are many different paths available to accomplish things.  And the reason we can get away with that is because we are counting on people working together, and that means every person out there is playing the exact same universe.  It’s not a multiplayer game, it’s a massively single player game. If you ever played Planetfall or Zork you will understand what I am talking about.

So right now, we are really busy on the adventure game part.   The Fleet battles is moving forward nicely.  We did end up having to throw out the “bit strip” pilot stuff (we still will support them but our ships won’t use them) as, well, let’s just say, they don’t hold up super well.  So back to the drawing board on that. 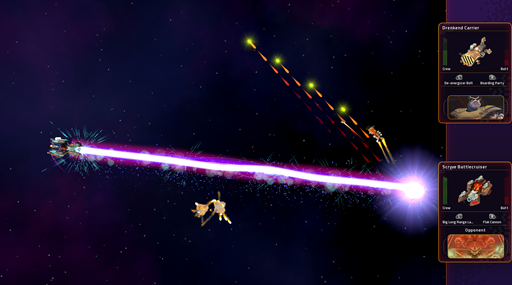 Fleet Battles continues to get love.