Galactic Civilizations is a game that asks the question: What happens after we start colonizing other planets? For our purposes, we are going to assume that we will come into contact with alien civilizations.

Alien civilizations will have their own histories, cultures and ideals that we can only fathom.  In Galactic Civilizations III: Crusade, you will be able to train your citizens to learn more about these other civilizations and, if necessary, do very bad things to them.

If you are new to Galactic Civilizations, you can skip this section, since I'm going to be spending it creating great outrage among GalCiv III fans.

Your old economy is dead. I killed it.

I killed it because each citizen matters. A lot.  You get 1 every 10 turns.  That means in a typical game, you'll see around 25 citizens.  That means they're not disposable.   There are certain planetary improvements you can build that will give you specialists (like spies), but they will be either wonders or 1 per civilization and require resources.

For 25 years, Galactic Civilizations had a preferred strategy: the colony rush.  This isn't surprising because that was, after all, the premise of the game.  Crusade doesn't get rid of the colony rush, but it adds other equally viable strategies. 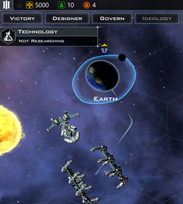 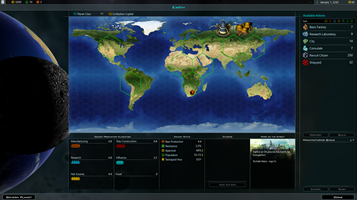 Turn 1: Look at your home world. Raw Production =  base resource production in every category.  There are no "sliders". Instead, you directly control your output either through using those precious citizens on a planet, or globally.

Now, let's say you want to do the colony rush thing. Well, then you will need to make a tough choice once you consume those first 4 admin points: 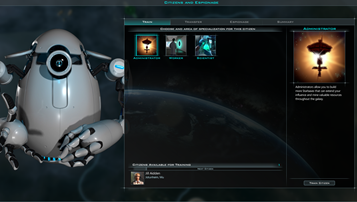 By turn 10, you will likely have 3 different training options for your citizens.

You might say, "It's always better to have more colonies in the long run..."

But what if I told you that there's now a bunch of early game Galactic Wonders (that can only be built by one civilization)? 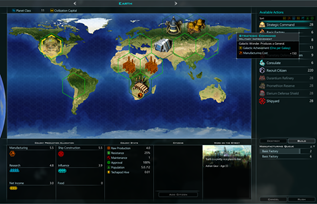 Hey, look at that? An early game Wonder that if I obtain it, I get a free General (which would let me invade a planet super early)

Galactic Wonders aren't cheap.  The Strategic Command, which provides a free General used for invading planets, normally takes 28 turns.  But what if I trained my citizen to be a Worker? 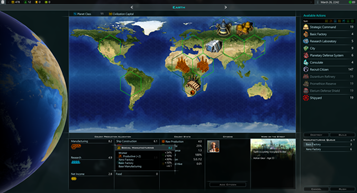 Putting my trained Worker on Earth yields a 33% bonus.

Now suddenly, that 28 turn wonder is down to 19 turns.  That's a huge advantage.  And the Strategic Command isn't the only early game wonder that does awesome stuff.  By the way, Basic Factories now only provide a 5% manufacturing bonus by default instead of 15%. This change scales through the whole game (the costs and production have all been redone).

And Citizens level up, which means he'll keep getting more and more powerful over the course of the game.

The other choice, Research, is more obviously beneficial. An immediate 33% boost to research on Earth is pretty huge.  And they stack (33% + 33% + 33%) so yes, you can do some crazy stuff.  Just bear in mind that all the other numbers have been heavily nerfed and/or greatly increased before you start thinking about having planets with 10,000 production per turn.

When you research the Espionage technology, you can then train new citizens to be spies. 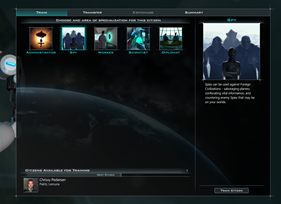 Train one of those precious citizens to be spies.

So if a single Worker can increase production on a planet by 33%, you can imagine how powerful a single Spy must be to balance that.

For starters, you can choose to do nothing at all with your spy, in which case he or she handles counter-espionage: 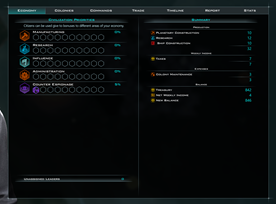 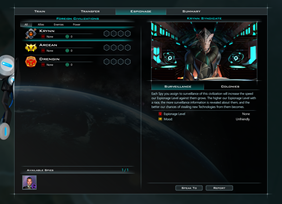 However, you can also use them for planetary destabilization. 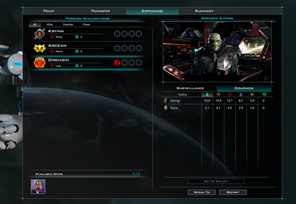 By clicking on colonies, you will be shown all of their planets that you know of (unless you've already done some surveillance, in which case you will get to see all their planets regardless of location). 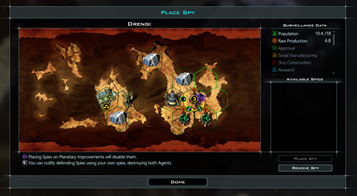 Placing a spy on a planet will do two things.  First, it knocks planetary production (raw production) down by 20% (and yes, it stacks).  Second, it will totally disable the improvement you station it on.  The target will know that there's a spy on that planet, but will not know who is doing it.

Now, I imagine some of you who were previously worrying about how powerful those 33% boosts to planet research from a single scientist are, are realizing that it doesn't seem quite so overpowering given that someone might nerf your production down by 20% with a spy or be stealing your tech that you're researching so aggressively, unless you save some spies for defensive uses.

You can kill a spy by sacrificing one of your own spies to terminate it. 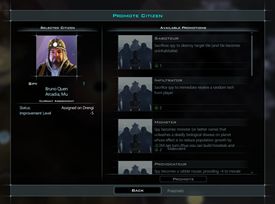 We're still working on those descriptions...

But that's not where spies stop being scary.  You can also promote them to become infiltrators, saboteurs, assassins, provocateurs and more -- if you have enough resources.    If you're an experienced 4X player, you probably read the above and thought about how screwed you could get if your enemies ganged up on you with spies.  However, if you are powerful enough in terms of resources (which is when your enemies are most likely to gang up), you can do things such as turn a spy into an Assassin and sacrifice them to kill all other enemy spies on a planet.  Similarly, you can use spies to wreck entire planets or get the people to revolt.

The super powers of spies aren't lightly used because they cost a lot of resources and most of the time, players won't have those resources or they won't have the proper ideology (sorry, no genocide for you benevolent types).  What it does mean, however, is that late game, the gods of the galaxy will truly begin to feel like gods as they begin to smite their enemies.