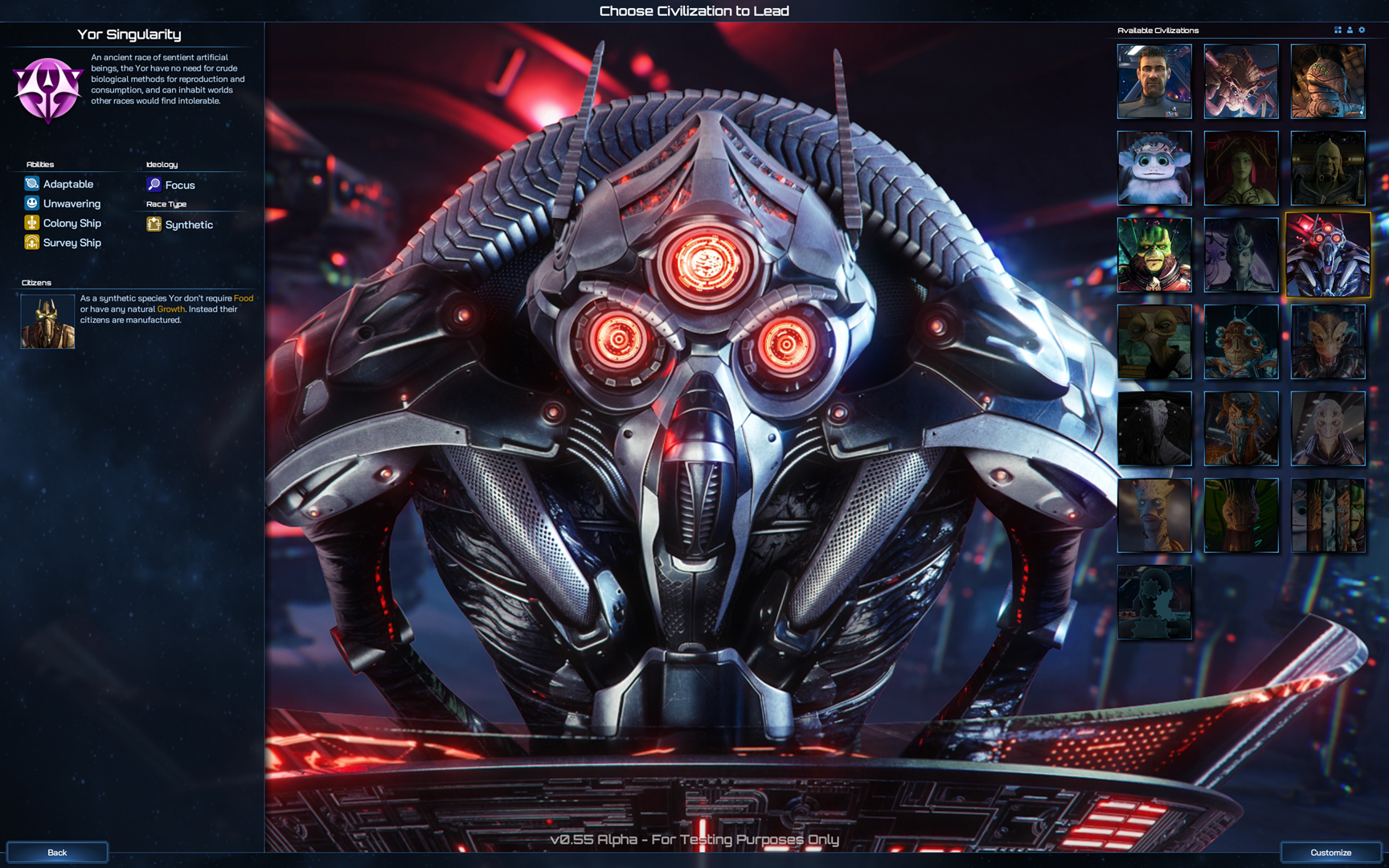 Play as the Yor

Our first non-organic species. The Yor have no growth rate and don't require food. Instead, they manufacture their population as other species manufacture buildings. They can also colonize a variety of worlds that can't sustain organic life right from the beginning of the game.

Their citizens start out with generally weak stats, but they have access to unique technologies that upgrade the capabilities of all of their citizens and can make them very strong later in the game. Do keep in mind that in GC4 your civilization can be made up of citizens of many species so even though your Yor might not care about food, if you capture a world of Mimot they will become very angry if they don't have anything to eat.

In addition to the above, all of the Yor Command ships are generally weak, but they boost the abilities of the fleet they are in, and each other if you decide to go full Voltron with them and make a super fleet. 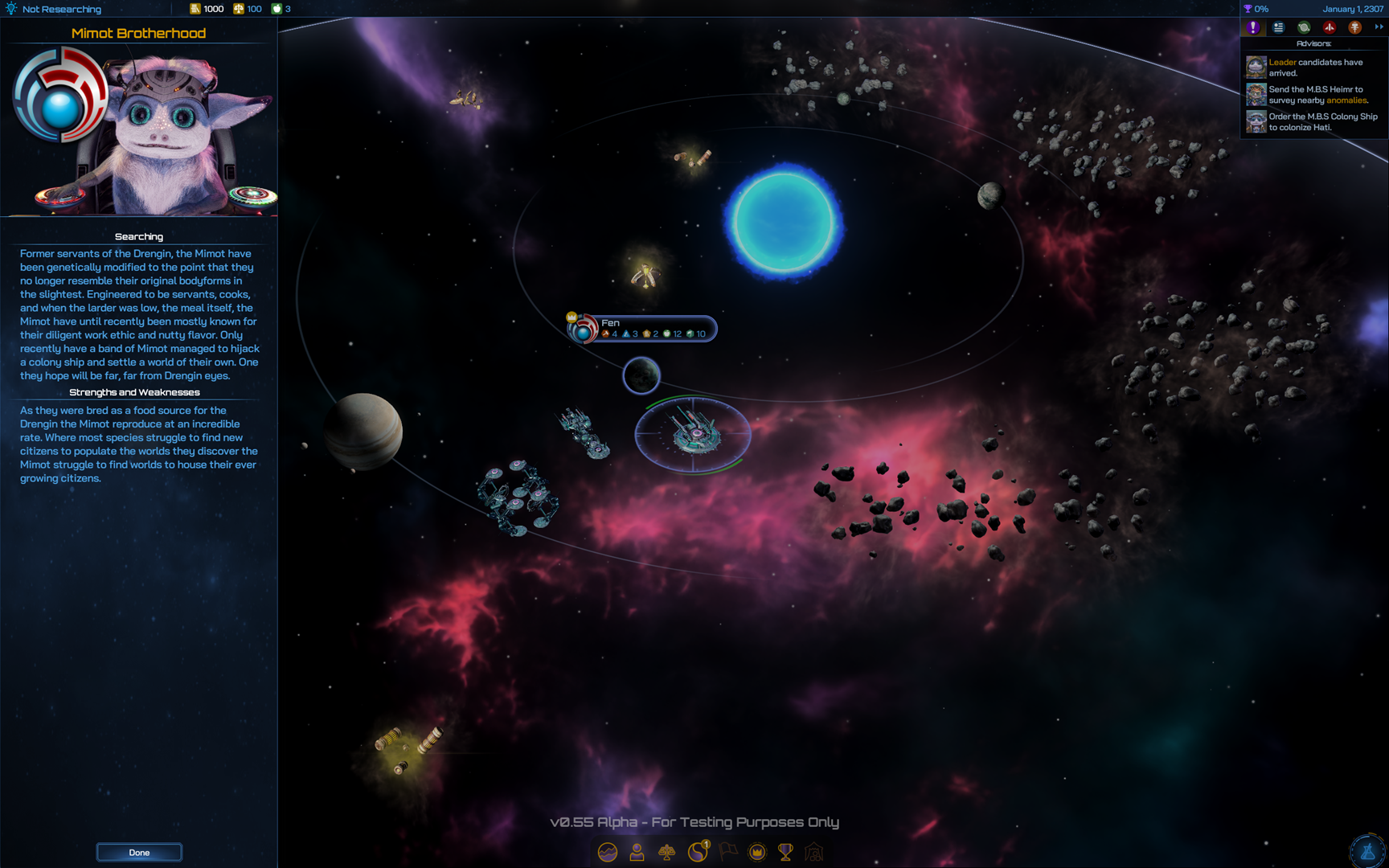 They may look cute but anyone who has played against the Mimot knows that they are deceptively powerful. They have the highest Growth rate and the highest Food requirement. Meaning that you always have plenty of citizens (they fill up their worlds quickly) and will often be struggling to find them new homes and keep them fed. You will never struggle to find a citizen to man a Colony Ship to a Starbase with the Mimot.

Their "rapid reproduction" applies to more than creating new citizens. The Mimot have the Proliferation ability which means that whenever they construct a ship, they get another for free. 2 colony ships, 2 constructors, 2 gunboats. This is why they spread so quickly. But their quick construction comes at a cost as all of their ships suffer a significant Hit Point penalty. If the Mimot's are to win wars they won't win against evenly matched fleets, they will need to overwhelm with greater numbers.

The Mimot Command ships also play into this theme of reproduction as many can produce new ships on their own. Making even a lone Command ship dangerous if it is able to produce an entire fleet if given enough time.

Galactic Achievements are a new feature we are testing. From this menu you can select a story event or challenge to undertake. Some require you to have met certain conditions before you can start them and all provide bonuses (including Prestige, the coming global stat for winning the game) if you complete them.

Traditionally we would have had these as random major events to occur in the game. We are testing them as player-initiated events (ie: you say when you want the event to start). That may break the immersion a bit, but also gives you control over your game. It also allows us to make them even more challenging since we don't worry about them hitting you randomly (word of warning: beware opening a dimensional rift right next to anything you value in the Orb of Draginol story).

The three introduced in this update are:

For example, the Burran are being harassed by Pirates. if the player takes care of their pirate problem they will offer either some Research, Credits or Thulium every turn in gratitude.

GC4 is going to support a Prestige, Conquest, Alliance, and Cultural victory. A player achieves Prestige by controlling ascension crystals, having advanced technology, being a military leader, an economic powerhouse, completing Galactic Achievements, etc. Basically, it is a way of ranking all the players in the game. If you have won by beating all the other players in several categories we don't make you play out the game, we award your victory (then if you want to play it out you can).

Events of all types can now be specific to a particular civilization. If you find the Festron survivors as the Festron there will be different options and dialog. The same for Drengin finding the Drengin Prison ship. The Yor also have some new events for colonization based on their unique perspective.
Colony ships now have an Auto-colonize command.

Check out the full changelog here.

Get into the Alpha now