In news that shouldn't be especially shocking: we really love games here at Stardock.

This extends beyond just PC and video games and well into things like board games and tabletop RPGs like Dungeons & Dragons. I've definitely talked about it before, but I also have a fairly sizeable board game collection at home. Before the pandemic, I used to bring games in fairly regularly and have game nights so that my coworkers and I could enjoy playing some together.

Earlier this month, we held our first in-person game night in over a year. About 22 of us showed up to play games and eat Italian food that Raeann (one of our awesome HR peeps) and I prepared. Throughout the pandemic, there were several new hires at the studio who have all been working remotely like the rest of us, and many of those people whose faces we hadn’t yet seen in person drove in to share some home cooked food, play a few games, and indulge in some good old-fashioned comradery. 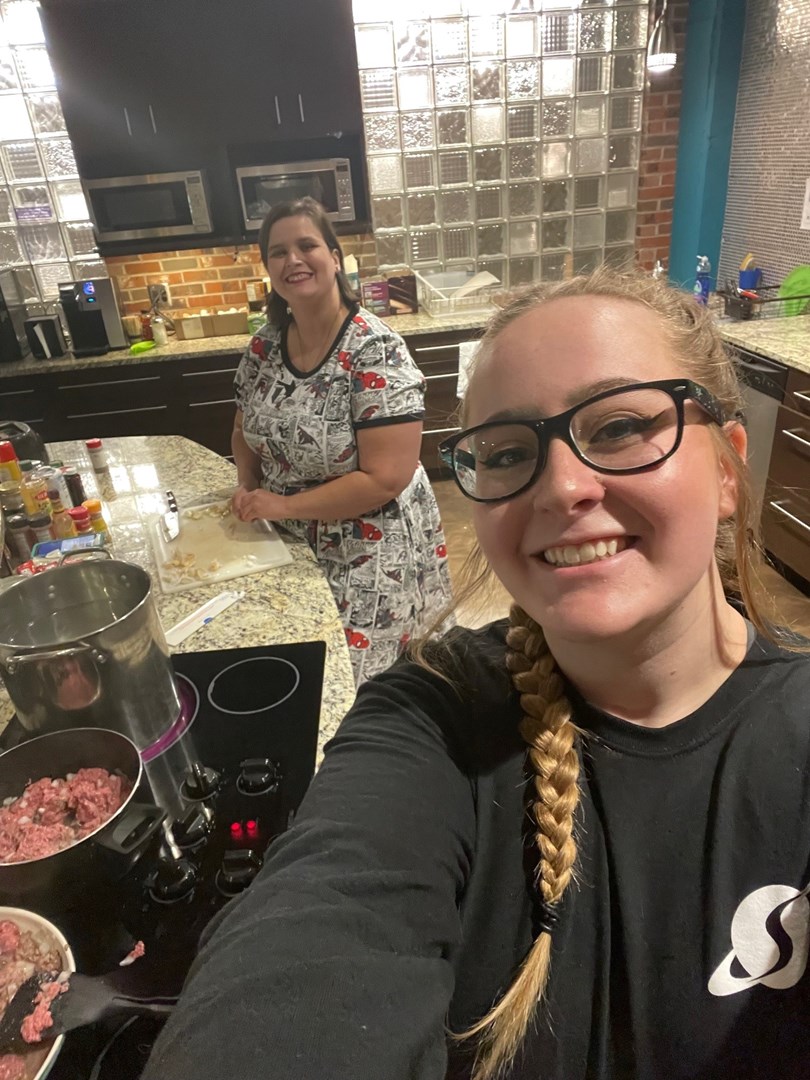 Raeann and I went downstairs after work and made
garlic bread, mostaccioli, and salad for everyone!

This is the largest game night I've ever had at Stardock, and I loved it! Normally we'd average between 8-10 people and would have to break out games like Codenames or Avalon in order for us all to play together. There aren't too many games that can comfortably handle 22 people, so I brought a selection (two large Sterelite tubs worth!) and encouraged everyone to pick whatever they wanted to play. 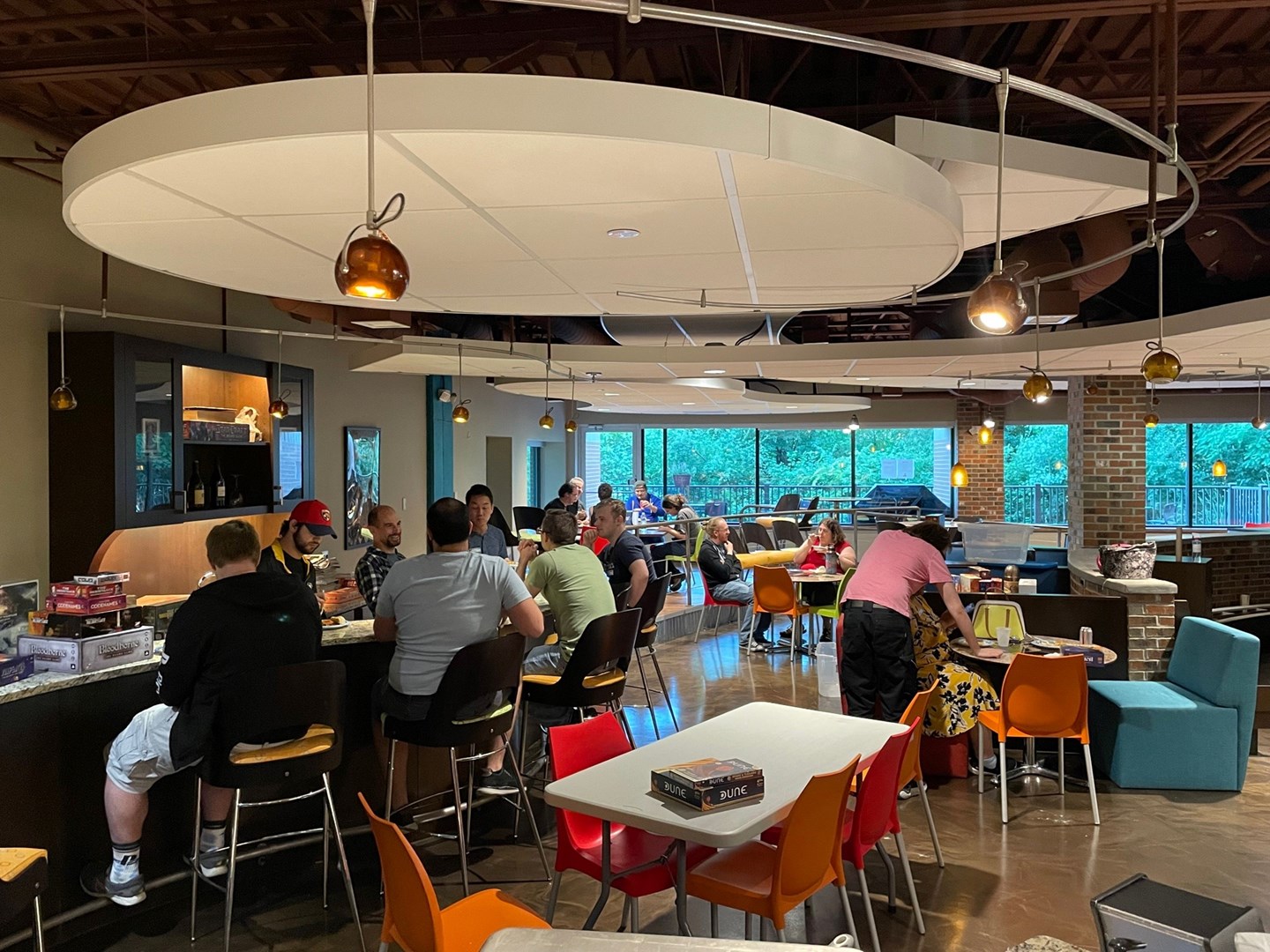 Everyone fueled up on pasta before we got to the games!

After we stuffed ourselves full of carbs, we broke off into groups and started in on our first games for the evening: Codenames and Secret Hitler. I was finally Hitler for one of these games and I couldn't get anyone to make me chancellor, which was super disappointing! I guess I just don't look innocent enough.

We continued to flip between games throughout the evening; below, I'll give a quick rundown of each game and what they're like so you can check them out for your next game night! 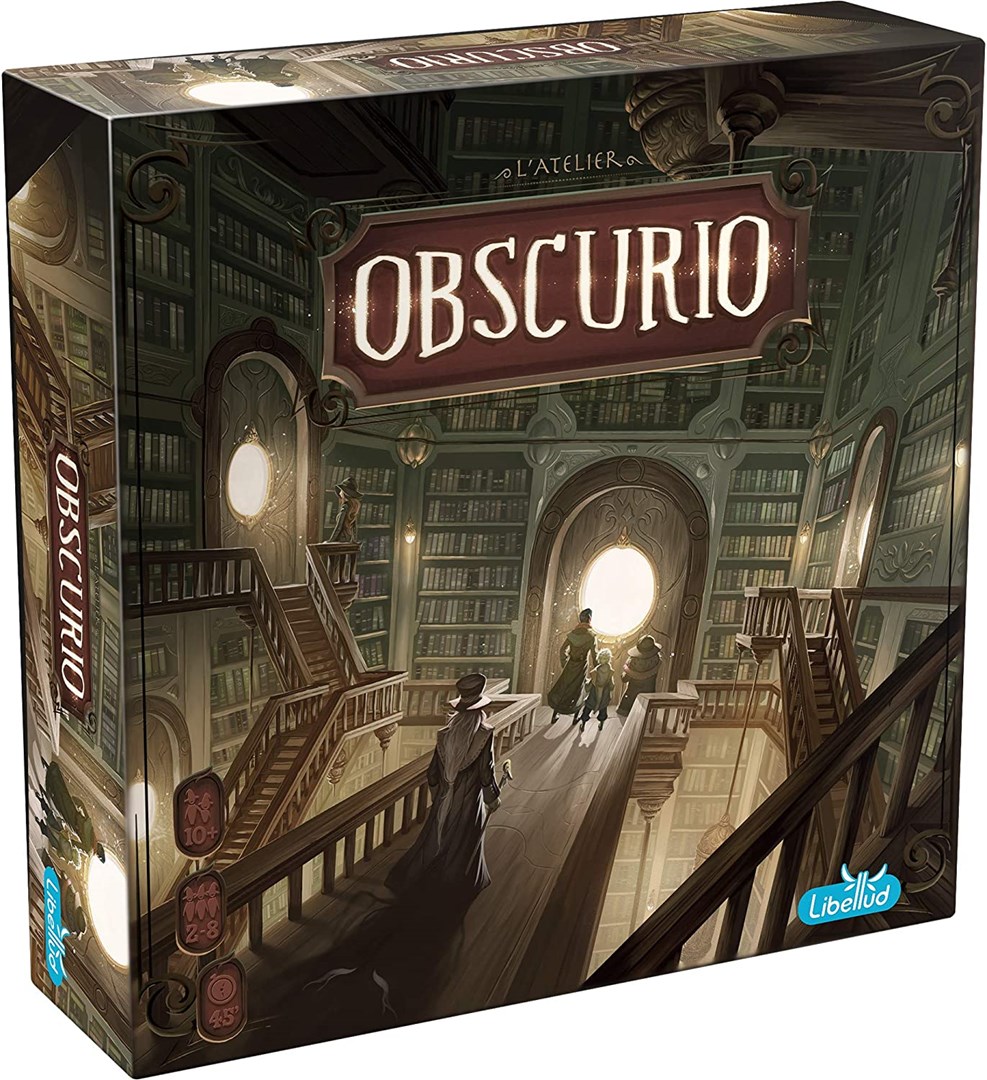 This is one of my favorite co-op games! In Obscurio, you're playing as a wizard who is in possession of a magical grimoire and is trying to escape the evil wizard's library. One of your companions has been enchanted by the wizard, though, and is actively working in secret to try and trip you up and force you to pick the wrong path, thus trapping you in the library forever.

One player plays as the grimoire, who gives clues and tries to guide the players to safety, while up to six other people can play as the wizards, with one hidden traitor among them. As gameplay progresses, the wizards must find ways to work around traps that make the grimoire more difficult to interpret, all while wondering just who exactly among them is in cahoots with the wizard. It's an exciting game that relies heavily on teamwork and abstract thinking, and is very much loved by most of us here at Stardock. 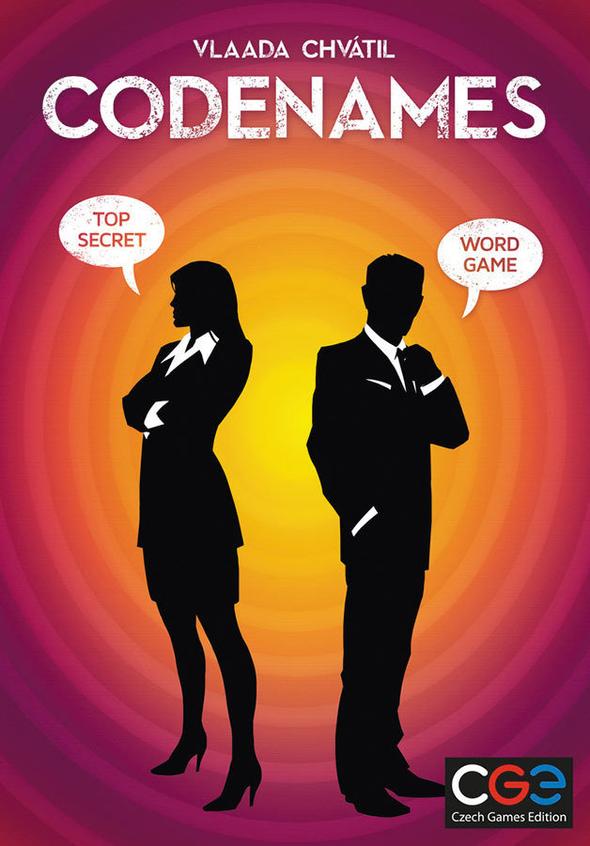 Codenames is a team game of secret words and deduction. Two rival spymasters know the secret identities of 25 field agents, but their teammates know the agents only by their codenames. In this game, two teams compete to see who can make contact with all of their agents first. To do this, the spymaster will give their team a one-word clue in hopes of getting them to guess the correct word on the board - but be careful! If you don't choose your clues wisely, your team might end up picking the codename of a rival agent, a civilian, or an assassin, which will instantly end the game and give victory to your rivals.

This game is fun and challenging - and it feels like it changes and is different every time depending on who's on your team and who is playing as the spymaster. It's a relatively inexpensive buy and can accommodate a larger number of players, so I definitely recommend keeping it on hand for impromptu game nights! 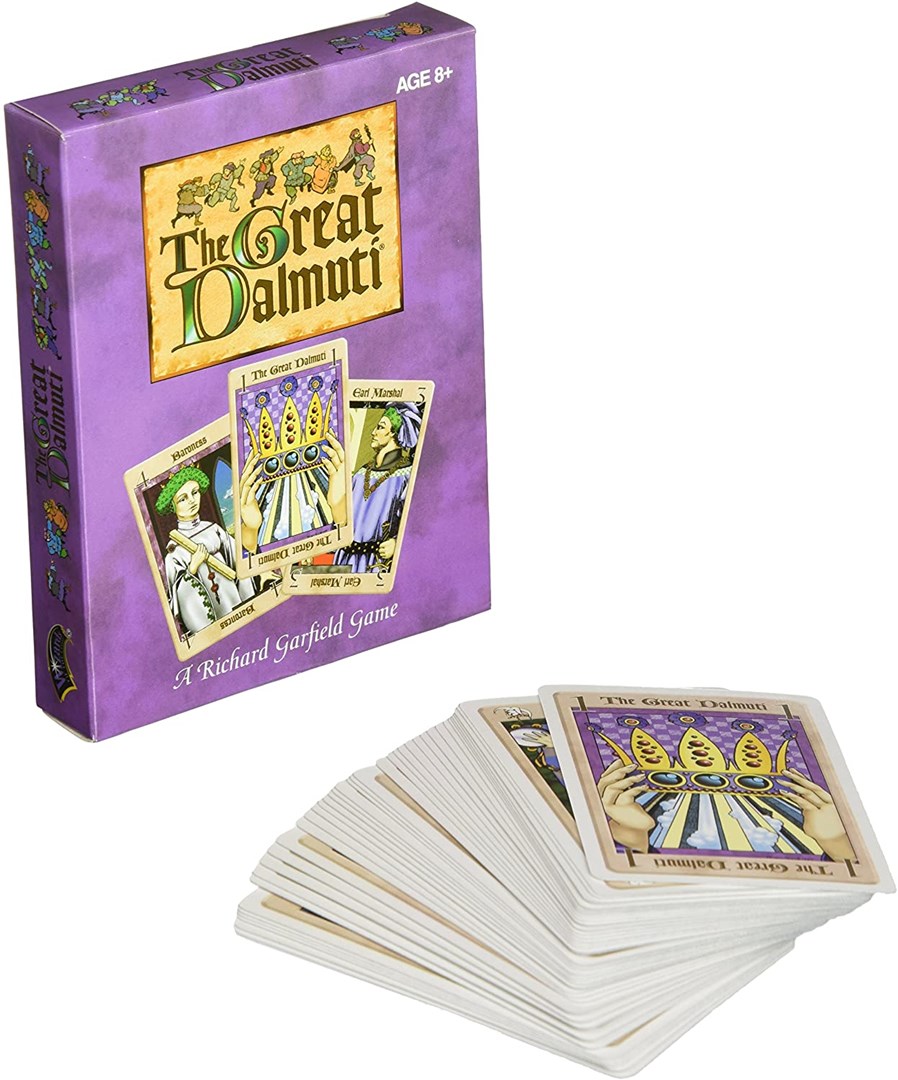 This game has been around for a long time - I remember playing this at the hobby shop in high school! - but it's still one of my favorite games to break out in a group of people.  This light and easy card game can play up to 7 players and honestly, the more the merrier! The goal is to empty your hand first, a feat that is much easier if you are lucky enough to find yourself in the position of being either the Greater or Lesser Dalmuti, a ruler who can tax the best cards out of their peons' hands.

This game requires players to shuffle seats - we also used silly hats! - whenever their position changed. Our table was constantly roaring with laughter, and because the game is so easy to teach we were able to get up and playing right away, so we got several rounds in before we moved onto our next activity. 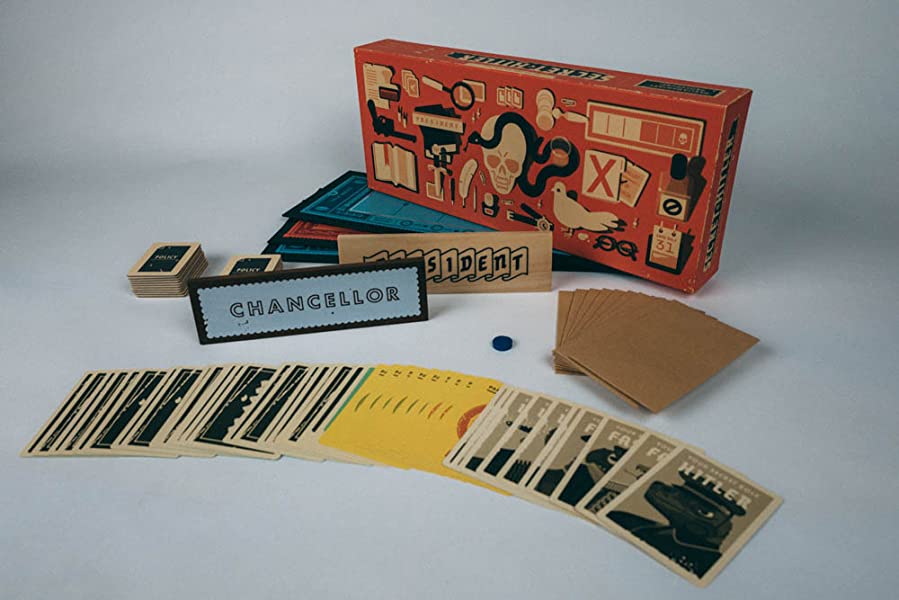 We love social deduction games here at Stardock. I keep telling Derek that maybe betrayal and lies doesn't make for the best team-building activity, but that doesn't stop us.

Secret Hitler is a dramatic game of political intrigue and betrayal set in 1950's Germany. Players are secretly divided into 2 teams: liberals and fascists. Known only to each other, the fascists must coordinate to sow distrust and install their cold-blooded leader, while the liberals must find and stop the Secret Hitler before it's too late.

Each round, a player takes the mantle as president and must propose a chancellor for election. Working together, they enact a law from the deck, but the chancellor could be forced into passing a law they don't want to pass depending on what their president gives them! Because all laws are viewed in secret, the players only have the president and chancellor's word to go off of, which can spread a lot of chaos very quickly.

If the Secret Hitler is ever elected chancellor after 3 fascist laws have already passed, the fascists automatically win. If the liberals manage to pass 5 liberal laws before this occurs, they win. The game is fast-paced and chaotic, and hits the table, along with the game Avalon, quite often at Stardock gatherings. 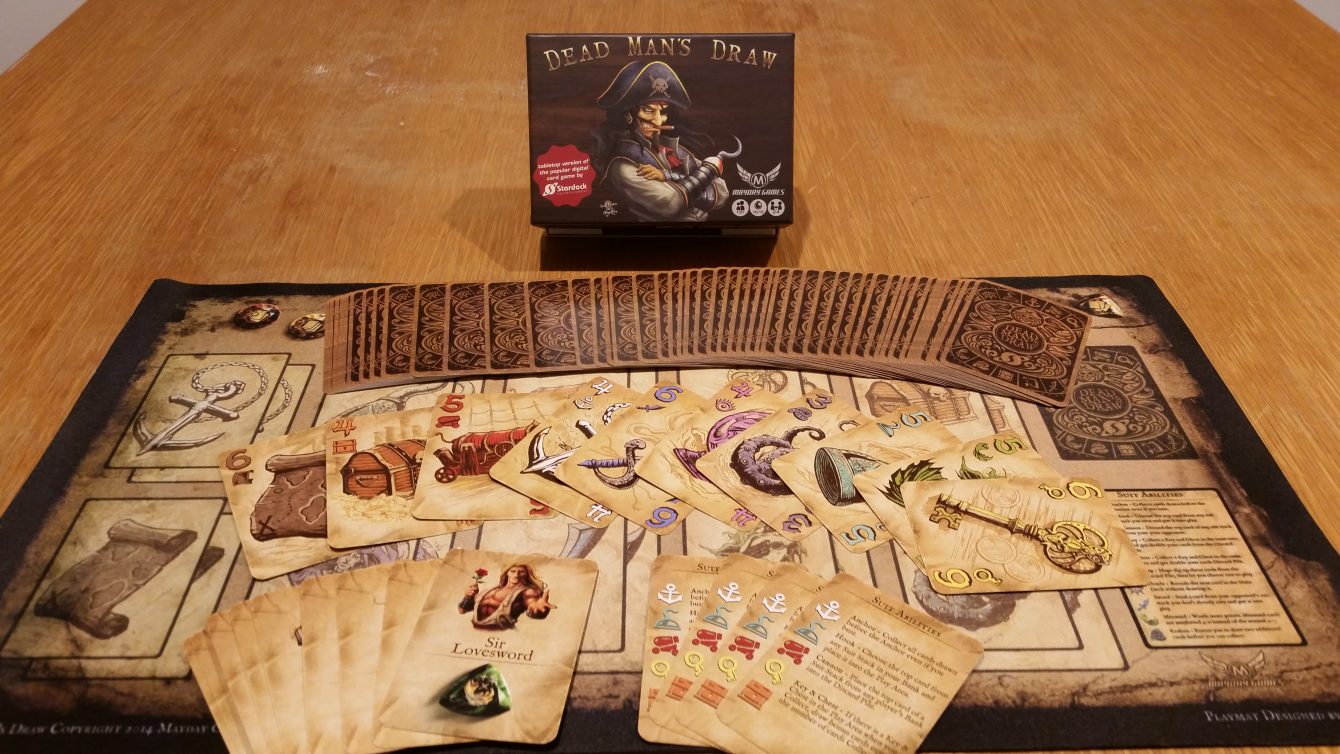 Look familiar? This game is honestly one of my absolute favorites in my collection because it is so easy to teach and everyone who has ever learned it has had an absolute blast! We have a lot of new Stardock blood here now, so I thought it was more than appropriate to introduce them to our only physical board game.

In Dead Man's Draw, you push your luck trying to score the most points by trying not to bust as you flip cards over out of the deck. If you ever flip up a suit that you already have in the lineup, you bust and don't get to score any cards for that round, so be sure to know when to stop!

Each suit has its own special ability, ranging from blowing up or stealing an opponent's card, protecting previous cards in the lineup, or even forcing you to flip over 2 cards whether you want to or not. The gameplay is fast paced and easy, and I know that the new Stardockians really enjoyed the game as much as I enjoyed teaching it!

Well, that was our game night in a nutshell! What are some of your favorite board games, and have you played any of the ones above? Tell me about it!