Beta 3 is Now Available
Create your own custom civilization, explore brand-new
leader events, and much more

Seek out new star systems and discover the exciting potential of the subspace realm in Galactic Civilizations IV. You are the all-powerful leader of a spacefaring civilization and will discover thousands of worlds and dozens of civilizations - both old and new - as you explore the galaxy and try to build a civilization that will withstand the tests of time.

Beta 3 brings the highly anticipated Civilization Creator to Galactic Civilizations IV! You can now create your own civilizations, complete with unique citizens, art, personality, ships, and so on. Play as or go up against your new civilization to see how it stacks up against others! Beta 3 also adds Leader Events, new command ships, policies, and improvements, plus several fixes and balance updates. Check out the changelog at the bottom of the post to see everything that's new! 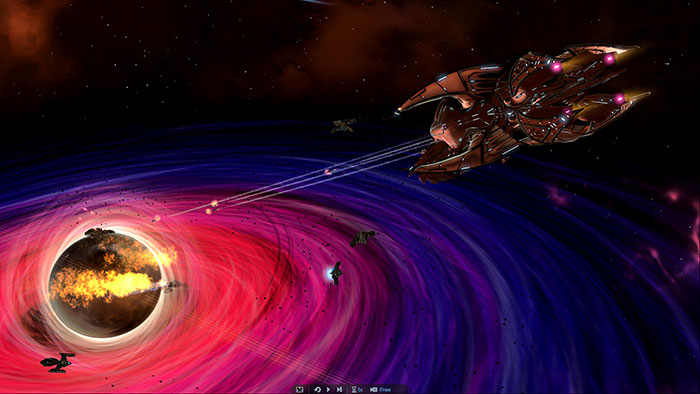 Raining fire from a distance is a much more effective plan than trying to get too close to that.

Create your own civilizations and bring them into battle! You can customize the citizens and the overall personality of your civ, import your own art, design special ships, and so much more. If you're feeling spicy, you can also challenge your newly created civilization just to see how you stand up against them.

Leaders now have their own storylines, event chains, and quests! Governors may also ask for help when something is going wrong on their worlds. From countering crime waves to finding a mysterious brooch, there are all manner of unique quests that you can undertake in order to help bolster the citizens within your civilization.

New commanders have been added for the Manti Cluster and the Torian Regime. Recruited citizens can become commanders of one of seven vessels that are unique to their civilization, granting you an edge over your enemies if you plan it right. While some grant bonuses to stats like influence and attack, others allow unique access to things like Promethion chambers or grant other special abilities.

Some new improvements and policies available to the game's aquatic civilizations have arrived in Beta 3! You can now build Tide Pools, Barrier Reefs, and Exotic Hatcheries for Amphibious species on Oceanic worlds. The Underwater Homes policy will also help you increase the population capacity on all worlds. The new Security Lights policy - available to all civilizations, not just amphibious! - will lower crime on all worlds as well.

Sandbox Mode is now available in multiplayer for those who enjoy playing the classic style with their friends!

Customize your own civilization right down to the image and flavor text! It's about time the Yor had some competition...

To learn more about how Galactic Civilizations IV is developing, please check out our Dev Journals. Want to know more about what's in Beta 3? Check out the changelog below.